A walk in the park doesn’t sound very exciting, except that it was very calming and soothing. After many days on the go, this small guided tour was a refreshing green window into another discovery of Berlin’s treasures.

Monument to war against France

The path at the entrance from the Tiergarten subway stop displayed the many variations of gas lanterns donated to Berlin from other cities (featured image at top). Each one was unique, and I was delighted to find Dresden’s contribution. Each city was proud to showcase its industrial development skills. Sadly, vandalism and limited funds have caused the historic elements to deteriorate.

Although the park is known as “Tiergarten” for “Animal Park”, there are no animals here. They reside in the adjacent Zoological Park. The Tiergarten was originally the private grounds for King Friedrich’s hunting pleasure. The garden was a pit stop between Charlottenburg Palace and the king’s residence in the center of Berlin. 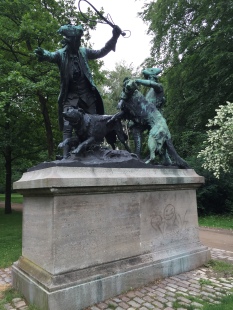 Among the many monuments and statues in the park, there was a tribute to the King’s hunting days (see photos and header reposted above). Gee Kin and I had discovered this curious pair of statues last year on our visit to the Tiergarten. The park was, and is, a welcome respite to the unbearable heat that can surprise the city. Another pair of statues made tribute to the king and queen. The king was clad in street clothes rather than in his official military regalia. The “street cred” represented his love of the casual, private retreat of the park .

Photos, in gallery, above:

A lakeside beer garden is a place where both Berliners and tourists can enjoy a leisurely day in the park. They even have dancing here, but I don’t think they have discovered Tai Chi yet.

A pretty decent performance of Tosca at the Deutsche Oper was hard to beat for 15 Euros, thanks to being a student of the Goethe Institute.

2 thoughts on “Day 30: Tiergarten and Tosca”