Our day began with a tour of the Reichstag Building. Angela Merkel meets regularly with the German Parliament here. Designed by Norman Foster, the building contained many symbolic elements: the preserved inscriptions by Russian soldiers who arrived on May 5, 1945; the cases of each Parliament member including Hitler, Himmler, and Angela Merkel; and a non-denominational meditation room that is used by members of Parliament before major discussions or decisions. Models of the building and the city helped to orient us. 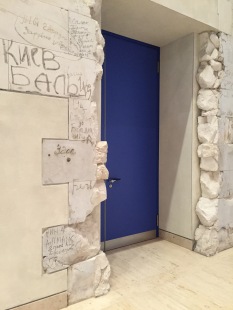 inscriptions by Russian Soldiers on May 2, 1945 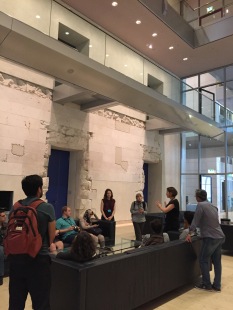 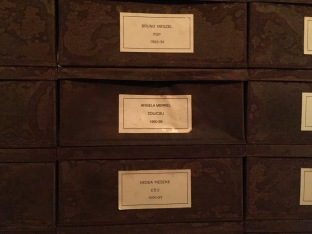 Three parties sit in the chambers: the CDU (majority), the SPD, and the Green Party. Other representatives of committees attend the sessions, and the public inside the chambers is able to comment on discussions or decisions. Angela-Baby sits at the very front behind the table for four members. The seating is generally open and does not designate fixed locations for Parliament members.

This was my second opportunity to photograph the impressive dome of the Reichstag. It has a historic display at the base, a view of the city, and a circular path to the top. Our guide explained to us that the building was 80% efficient for energy purposes, but the ventilation system had not performed as expected. Our last visit was proof that the dome can be an oven. It was stifling inside and we felt like we were being cooked in a George Forman grill!

It was much more climate-friendly this time.  Overall, the building provided necessary and significant symbolic features that help visitors to capture their understanding and appreciation of the new German parliamentary process.

Partial view of Dome and Stem

View from the Exterior

Dome at the top

Detail of the Ishtar Gate

Map of Near East

Scale and Proportion of Hellenistic Temple

Since the museum is under construction, many of the artifacts were not available. The museum focuses on ancient history.