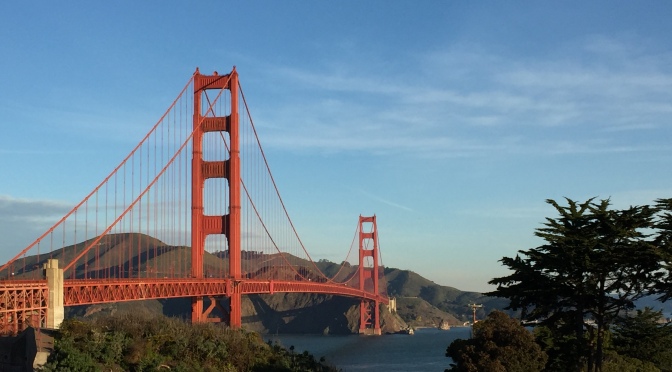 Being back in San Francisco encourages me to continue my frequent walks throughout the city. Being situated in the southwest quadrant of the city, we can easily go in any direction–the city is merely 7 miles wide in any direction as the crow flies–and hit a water’s edge. The 7×7=49 square miles makes it easy to conquer the city by car, bus, bicycle, or walking. Whenever I can, my choice of transportation is on foot. I can accomplish a 3-5 mile walk in less than 2 hours.

Admittedly, it takes a bit of clever navigation to avoid the daunting hills of San Francisco! Tourists have been often thwarted by the steep elevations and unforgiving fog banks in California summers. Clad in bermuda shorts, tourists shiver as they study their maps. Plan views show short stretches between Fisherman’s Wharf and Downtown. In reality, going through Nob Hill requires a hefty hike in elevation of 400 feet! And that’s with a few bumps and bruises along the way, as the elevation rises and falls. It’s no wonder that tourists are stunned not only by the beauty of San Francisco, but its harsh climate and terrain as well.

For local city dwellers, I learned that there are more than the seven traditional hills in San Francisco. Here is a link to a description of the 53 reported hills if you are curious: http://sfgazetteer.com/how-many-hills-in-san-francisco.html

As a locavore, I enjoy exploring the streets of San Francisco and comparing them to the many scenes of cities I have visited throughout the world (for some reason, Prague comes to mind first). Since last October’s Halloween festivities (see Hallo Halloween from October 30, 2015 posting), I am realizing that San Franciscans LOVE decorating their Victorians and sweet homes. There is definitely pride in a little city that CAN. The more I walk, the more I notice the sweet, sensitive little details that make this city sparkle. Here are two random samples from this month’s holidays:

In addition to Valentine’s Day and Chinese New Year’s (Feb. 8 this year), San Francisco hosted the 50th Superbowl. Not being an avid sports fan, I failed to capture any photos of the carnival-like atmosphere downtown. It did preoccupy the city and drive it crazy for three weeks, so there was alot going on this month. Americans love celebrating holidays, and now it seems to extend beyond Christmas and Thanksgiving.

Aside from local city walks, husband Gee Kin and I continue to take urban walks throughout the Bay Area. After accomplishing various routes from San Francisco to Napa, Oakland to San Jose, and San Jose to San Francisco, we are now finding extensions beyond. We mapped out a route in the past couple of weeks from Petaluma to Santa Rosa. You can see the route screen shots here: 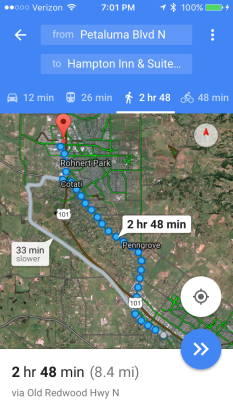 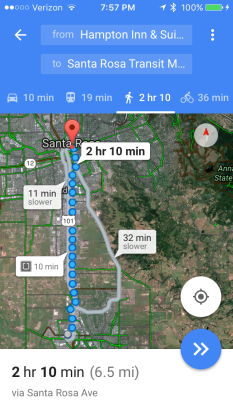 I originally planned to stay overnight at the Hampton Inn. In the past, I linked each day’s 8-12 mile walk between hotel rest points. I discovered that you can do the same with public transit points. As long as you are linked to connections back to home base, you can string transit points to each other, and easily pick up where you last left off and by paying attention to transit schedules.

Each leg was accomplished on a separate weekend day. We took Golden Gate Transit to each point of departure to link the route, so each walk was an easy day trip. The beginning and/or end of each walk was capped by a visit to a local, perhaps newly discovered restaurant as a reward! We discovered the Naked Pig in Santa Rosa, a roadside diner with all naturally produced ingredients.

Diners on Weekend in Santa Rosa

The featured photo shows another weekend walk out the door and across the Golden Gate Bridge to Sausalito. We topped our trip with a visit to Scoma’s for mussels, fries, and pink sparkling.

Next time you get good weather, think about walking out your door to a restaurant you’ve been dying to try. And don’t forget to smell the roses along the way. Let me know what you do!!

PS. Plans are underway for this summer’s travelswithmyselfandothers. Hint: Oh No! The TSE and GI AGAIN??!!

We are now able to link our Bay Area walks physically from Santa Rosa to Los Gatos. If you are interested in doing it too, see http://www.crazyladywalks.com.