My focus for the Metropolitan Museum was to see the Central Asian and Silk Road related items to reinforce my understanding of the intercourse between East and West.

(You can tap on one photo to get full screen views in a slide show. Give time for them to upload.) 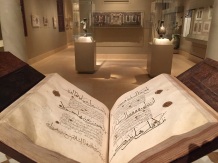 Islamic calligraphy from the Koran. 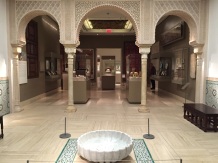 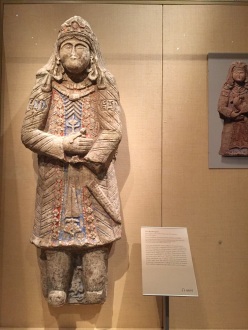 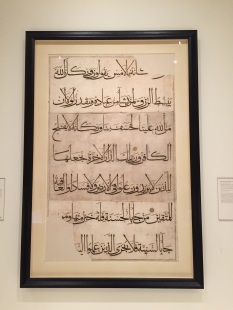 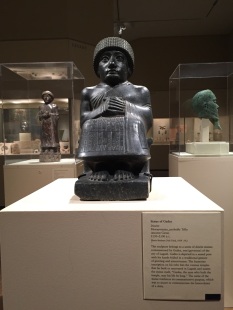 These are examples of Central Asian Art, beginning with the establishment of Islamic religion around 700AD through the reign of Timur or Tamarlane around 1350. If you remember from my travels in Samarqand and Bokhara, Timur’s base was there but he and his descendants conquered Iran, India, and everything in between. 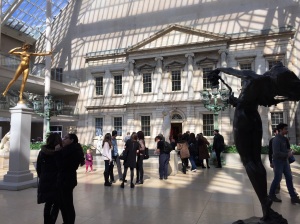 At the museum, huge scale entry gates, temple facades, and rooms or courtyards installed in large rooms or areas help visitors understand the architectural scale and context of various cultures. Above is the neo classical facade of a U.S. Bank from Wall Street. Below is the description and view of Assyrian entry gateposts. The map shows the location of various products traded throughout the world, including slaves from Africa, spices from East Indies, and chocolate from Mexico. 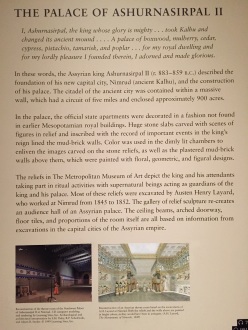 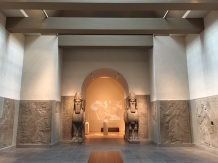 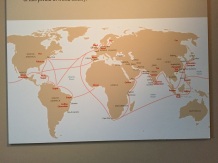 Here are a few selected Chinese items from the extensive Asian wing (only the first item is Silk Road related): 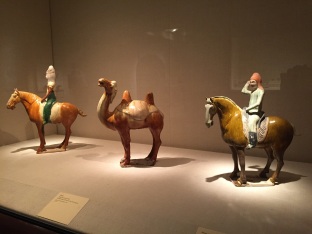 1. Horses and camels were coveted from Tang period when they were first traded from the Ferghana Valley, the narrow passage between China and Today’s Uzbekistan. The woman wears headgear to protect her from sand and dust.
2. Ming scholar’s room displaying furniture from period.
3. Bronze wine vessel that depicts serpent on cover and handle. Steam comes out of mouth when wine is hot.

Another “MET” addendum, from the Metopera: curtain call for Don Giovanni by Mozart. 19th century writers admired Mozart as one of the first musicians to tackle deeper psychological aspects of human triumph and tragedy in the main characters. 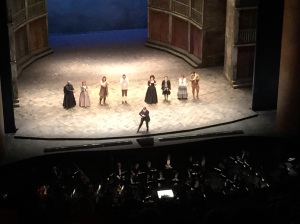 Sorry, sports fans, I didn’t make it to any NY Mets baseball game, as the season hasn’t opened yet (Or that I am aware of; unless they are training elsewhere I don’t think they schedule games on snow-covered baseball fields!). Otherwise I coulda hit a triple!