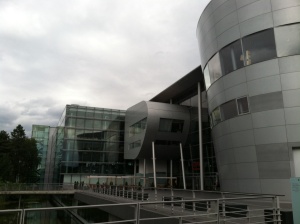 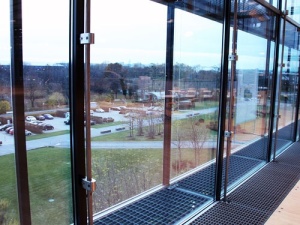 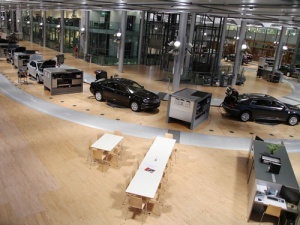 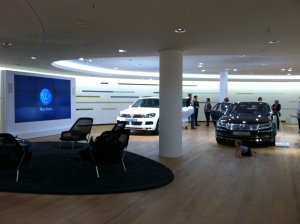 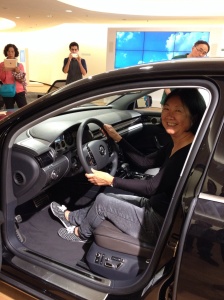 Photos, from Top, left to right:

1. the Exterior of the VW Factory, designed by Gunter Henn at the end of 1998. While not necessarily the first of its kind to showcase the production of vehicles in Germany, the building is representative of the pride that Germany takes in one of its signature products and namesakes.

2. By using primarily glass curtain wall, the facility brings incredible light into the facility for its occupants. Located in the area around a major green space (Grosser Garten), however, presented different issues. Birds cannot detect the building due to its transparency. Special sound effects were added so birds think that the territory of the building is already claimed.

3.The conveyor belt for the “assembly line”. These cars were pre-assembled in other parts of Germany. Cars are transported here for final finishing to showcase the most interesting visual effects of the production line for customers. Unfortunately, we were not able to see the actual movement of the line due to the scheduled 3-week “Urlaub”. The maple butcher block flooring from Canada covered the entire ground floor area and is engineered perfectly with no gaps to the mechanical conveyor system. Work stations move with the line.

4. The showroom, where customers can test out and order custom made Phaetons.

5. How did VW know that black was my favorite color? 60% of the others who buy this car think it’s tolerable too. It’s only a cool 135,000€.  I couldn’t understand why so many people were taking pictures of me.