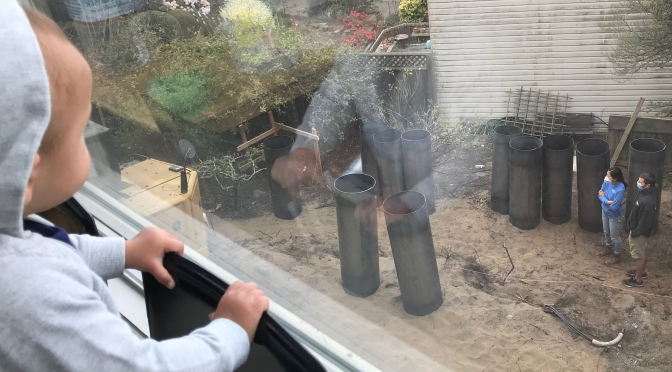 The Dining Room Window gives us a front row seat of the ADU (Accessory Dwelling Unit) construction in our back yard. For much of the last two months, it felt like watching the grass grow at times, and sudden operatic performance at others. There was plenty to consider, ponder, and worry. With the rainy season emerging, there are additional concerns about weather protection and drainage. Nevertheless, the substructural work inched forward with big digs, long tubes of steel linings welded end to end, gnarly steel cages, and finally concrete.

During the first weeks of foundation work, the crew mobilized their equipment and laid out all the positions for the piers. They began by drilling the first four pier holes along the edge of the existing house to support the addition and to underpin the existing foundation. As mentioned previously, our site is basically a sand dune and the loose soil is prone to caving. Getting to the 25+ foot depths required by the soils engineer proved to be arduous.

To reduce the risk of caving, the crew poured the piers in two stages. The initial pour included the five 25+ foot piers and seven 8′ deep deck piers. Photos below show the arrival of the truck and equipment assembled for the first concrete pour.

Most of the time, our site looked like a giant bowl of flour! In the beginning, the excavator scraped the edges of the bowl and pushed the floury dirt around. It felt even more similar to baking when the concrete was finally pumped from the hoses during our first pours. The liquified concrete pouring out of the hose looked like thick whipped cream extruded from a pastry tube, but not as appealing.

The foundation crew continued to drill holes, insert steel casings and rebar cages for seven “shallow” deck piers. These piers were drilled approximately 20 feet to bedrock. The sandy soil continued to present challenges, as the soil had no compressive strength and collapsed when drilled. Geo-grout was used to stabilize the openings so drilling could be accomplished more reliably.

It was very humbling to watch as each day’s events unfolded. Every crew member was fully engaged. The video below shows pier holes being drilled by the excavator and a crew member guiding the drill into position while another crew member cleared the sandy soil from the drill. A fourth crew member checked and adjusted the grout in one of the piers.

The final stage of earthworks began. The crew drilled the five remaining 24″ wide holes for the piles that support the addition. The cement truck returned and issued the second installment of concrete.

As in the first pour, the geotechnical engineer, the city building inspector, and the special inspector reviewed and approved the excavation and reinforcing steel before the second concrete pour. Our construction manager choreographed the intricate dance between consultants and contractor.

Once the steel casings were put into place and the holes were drilled, the steel reinforcing cages were guided into place with the excavator.

You can get a sense of the depth of the opening by the height of the caging, which in some cases were over 30 feet long. In order to lower the cages smoothly along the full depth of the opening and to ensure enough clearance for the concrete to be poured around it, the crew attached rolling spacers in intervals at vertical bars along the edge of each cage.

Daily spot checks from Foreman Felix ensured that the construction manager was on site during this stage of construction.