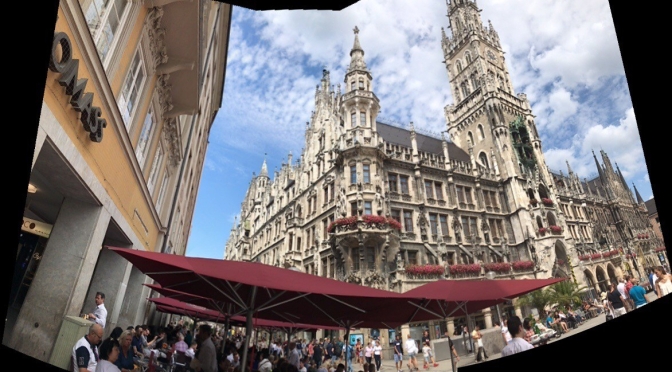 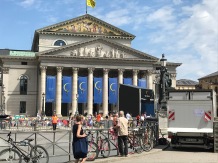 Munich turned out in flying colors for the launch of my World Trip 2018! I’m here for a month to study German, and then travel with hubby and friends at the end of the month before heading to Asia in August.

A quick subway ride two stops from where I am staying brought me to the city’s center. Nearby Marienhof provided locals and tourists with musical accompaniment for Germany’s national pride and specialties—beer and a donor kebab.

The main attraction was a Greek Cultural Day, featuring a dance group:

There was literally “Dancing in the Streets” among the crowds:

A more staid but dedicated group around the corner at Maximilianplatz in front of the National Theater waited patiently for the five-hour free, outdoor live screen production of Wagner’s last opera, Parsifal:

This opera, about the search for the Holy Grail,  featured top international opera stars Jonas Kaufmann as Parsifal, Nina Stemme (from recent NY Metopera Tristan and Isolde); Rene Pape (also from Wagnerian opera fame and many others); and Wolfgang Koch (from Bayreuth fame). You will be hearing more about these stars when I see my second Ring cycle later this month in Munich. This was a great introduction to the operatic skills of these artists in what was touted as the “Opera of the Century” for its blindingly glitzy star lineup.

Despite my excitement in making it here for this major public event, my jet lag started to take effect by the early evening.  I returned home to slog through the rest of the opera by live stream.

At the airport earlier, the quarter final soccer game was televised at the United Lounge. Croatia won in a shootout after a nail-biter with Russia. A Bosnian woman and I became instant friends by watching together. She lived in New Mexico and was flying to meet her family in Frankfurt. I am officially a World Cup soccer fan now after binging this year on nearly every game that was aired on Fox TV.  Here’s one of the exciting moments when Croatia succeeded during one of their kicks:

Hopefully you have become World Cup soccer fans by now too. You only have to invest your time once very four years, so it’s a very efficient and effective form of addiction. Long-time friends Larry and Corene, who were visiting the Bay Area earlier this week, are also avid World Cup soccer fans. I was impressed that Larry could name all the star players and knew the back stories to the coaches in the various leagues.

A few screen shots capture the emotional roller coaster for fans and players, and the elation at the bitter end: 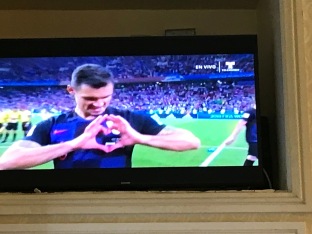