Art has been elusive in Düsseldorf, until I made a point to seek it out. Works by Luther promoter Cranach and German Expressionist Otto Dix were in town but hard to get to even though they were only a stone’s throw from where I lived. I discovered the Kunst (Art) Academy, where Gerhard Richter, one of my daughter’s favorite artists, studied and taught. The sobering words carved at the entrance seem daunting, for both student and teacher.

Area around the Kunst Academy

I originally came to the area seeking art supplies, and was delighted to find a tidy art store complete with what I needed for my sketching class in Morocco. It’s scheduled to begin at the end of the week, and I hadn’t stocked my bag yet. I sent all my German books  home so I could fit and replace the new materials in my carry-on.

I enjoyed the experience so much that I decided to lay everything out for you. Just like ingredients for a soup, these are going to be the base and the flavor for my upcoming sketches. I loved all the quality German-made sketch paper, colored pencils, pastels, graphite pencils and holder, and even the UHU glue stick. After further inspection, however, I discovered that the gray pliable art eraser (in a plastic case) came from Malaysia and the markers from Korea. Oh well.

And just so you know I have my priorities straight, I stopped at the German bakery Heinemann’s for a kirsch cake over a Chocolate sponge and chocolate biscuit. They even packed the whipped cream with tender care “to go”.

Over the weekend, friend Vladimir was visiting and we made a stop at the Neanderthal Museum. Not one of my favorites, but here’s a tiny description of the 2,500,000 years of Migration, described as a “river”, with ebbs and flows”: 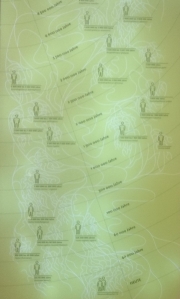 The burial discovery of a family of 14 showed how they were hacked by axes, where blows to the head were visible. The museum is the site for a discovery of Neanderthal man that was dated to 40,000 years ago, but earlier discoveries of Neanderthal man were made in Belgium before then. A number of artifacts and copies of archaeological finding were duplicates used to explain the evolution of man.

We made it back in time to see an innovative and clever version of the “Magic Flute”. The Germans are experimenting with new ways to present and appreciate the classic operas. In this one, they used the Buster Keaton silent film era graphics and period style as the backdrop for the beautifully enduring music. It worked well, the graphics and animated portions were original, creative, and thoroughly enjoyable. Don’t be surprised if you start seeing more of these interpretations as opera becomes more widespread and appealing to younger audiences.

For those interested, here’s a clip of the performance at the Opera on the Rhine in Dusseldorf:

As I close this month’s visit to Dusseldorf, I am sorry to leave. The attention to art, music and culture is clearly evident, albeit subtle at times. In addition to promoting fashion, media, and trade fairs, the city has a bright and forward-thinking approach that will continue to make it a leader in these industries.

Addendum: a preliminary sketch of a static and well-behaved model that served as prep for my sketching class (photo was taken after the sketch!)

And the music legacy lives on as well…here’s the parting music and dance that took place on a casual 90 degree afternoon on Konigsallee around the corner from my apartment:

In Düsseldorf, you can hear year-end recitals by students at the Robert Schumann Musikhochschule free of charge. The piano recital I attended had a dozen or so students. Watch for these world-beaters in the upcoming years. The majority were Asian students. It will be interesting to see how they can influence Western music in their own countries.

I’m off to Morocco tomorrow, to meet with a sketch group organized by an art teacher at City College of San Francisco. Join me for some first-hand, and first-time experiences and adventures! I probably will post around the end of the week after getting acclimated, so stay tuned!