We are in Day 5 of ger living. Despite its challenges, the variety of gers has allowed us to get a full flavor of ger living. Our last ger included a stay along one of the largest fresh-water lakes in Mongolia. While rudimentary, it gave us a feeling of staying at Lake Tahoe, Mongolian style. 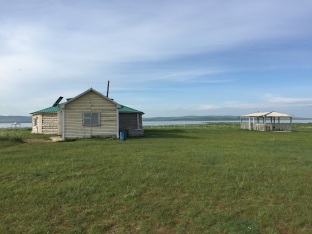 A rare building near the lake

The many incredible, pristine pastoral landscapes we encountered traveling off-road by Land Cruiser included frequent herds of sheep, goats, horses and cattle. These are free-range animals, owned by herders who live in nearby gers, and have no fences. The animals get rounded up at the end of the day and know who and where their friends and family are. We had a full court press of the domestic animal world with a few wild ones and migrating birds for flavor. 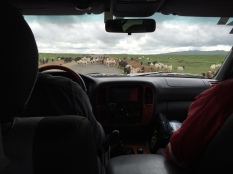 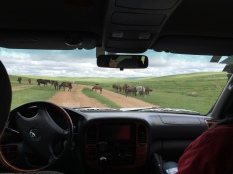 The Erdene Zuu Monastery was founded in 1586 and is the first Buddhist monastery in Mongolia. The religion came from India and Tibet in the 12th Century. The grounds of the Monastery are preserved as a museum. The adjacent complex is a working temple. The temple was built over the palace built by Ugudei Khan, and materials were taken from the ruins. 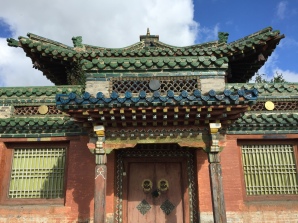 Dragon made of Wool and Plaster

View of Gate from Entry

The Kharkhorin Museum presented a fascinating series of maps showing the the history of Mongolia. If you are curious, please click on these to see more; if not, skip this section. 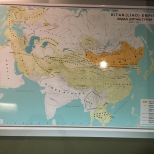 The Chinese Han Dynasty successfully fought back the Xiong Nu empire in Northwest China, and early portions of the Great Wall were built to deter the Xiong Nu from advancing further. (Remember Mu Lan? She was fighting the Xiong Nu!) You can read more about the ruins of the early Great Wall in my posts from Turpan in August 2013.

In the following series, you will learn more about the history of the great Chinggis Khan (1162-1227), one of his sons Ugudei Khan (1186-1241), and his grandson Kubilai (1215-1294). The maps attached are in some ways easier to read than the ones above, as they show the flow of conquests. Take a look at the arrows and dates on the maps and the extent of their conquests in the span of a century! The influence of the Mongols reached as far west as Iran, Iraq and Turkey. 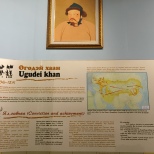 Ugudei Khan, one of the sons of Chinggis

In the same museum where early 8th Century Turkic memorials were preserved, a tomb for servants contained miniature figures similar to those found in Xian. They had Han Dynasty characteristics similar to the figures we enjoyed seeing in Dunhuang Museum in Northwest China. They had unique, expressive faces and lively gestures in their bodies. Apparently these were not created in a tomb for any noble, but were offerings by servants. The size of the figures, gold, and ceramic pieces were not large enough to represent those that were buried with those a leader.

The cast of thousands