After posting “Ich bin eine Berlinerin” in January this year, I have renewed my vows for this thrilling city. This time, I am even more emphatic and feeling that I have come to greater respect and appreciation of this vibrant, active, and considerate city. I suppose you can find the opposite in any city, but at the moment I am insatiably intoxicated by Berlin and all the human effort that makes a great city livable.

The week has been packed with German lessons, getting to know other students, and walking tours of neighborhoods nearby. I comprehend about half of the commentary since they are in German, but the visual experience provides the other half. There are so many new elements of the city that I had never seen or understood in the past three visits. 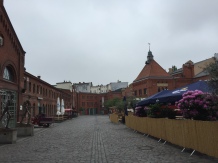 After the walking tour of Berlin Mitte from the day before, the same flamboyant guide escorted us to Prenzlauer Berg. Located on the East German side, it started off as a fairly respectable residential neighborhood, with classic Parisian style facades. Our guide pointed out a few vestiges of Jewish life still visible today–a school with a synagogue behind it and some serious security bollards in front.

If you are interested in the artist honored in the sculpture above, here’s a link to Kathe Kollwitz: https://en.wikipedia.org/wiki/K%C3%A4the_Kollwitz

The later, mind-numbing residential blocks were created in the Sixties (not shown). To support the residential areas, schools were provided. The renowned and advanced development of German schools was a feature of the tour. One current-day school we stopped at has an “adult-free zone” to reduce stress for kids! Schools and a good education seemed to be a tradition and pride of former East German society.

By the Eighties, Prenzlauer Berg deteriorated to a point of neglect. No families lived in the area because the housing was outdated. The big blocks built previously were designed with only one bathroom and communal kitchen per floor. Twenty years later, no one would tolerate that standard of living. No one could afford to renovate either, so families moved elsewhere.

The guide continued to spin a story for us about how the area was rejuvenated, literally. After the fall of the Berlin Wall, everyone was so euphoric. People in the newly reunified city squatted and held parties in these abandoned buildings. Exactly nine months later…

…and now Prenzlauer is considered one of the most livable and desirable areas for families in the cities! From what was a shelled-out, deteriorated, and abandoned neighborhood, schools and other services were re-established to serve the residents. It’s transformed from what was once today’s version of Kreuzberg to Berlin’s Upper West side. 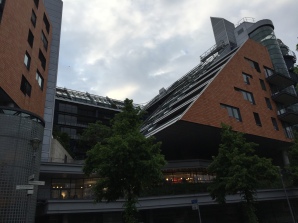 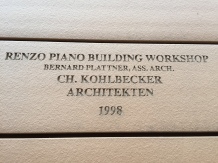 A tour of Potsdamer Platz gave another completely different dimension to my impression of the area. We had stayed there last year (after the Beijing-Moscow-St. Petersburg Trans-Siberian Express), but spent most of the time in the Tiergarten due to the scorching heat at the time.

This tour focused on the architecture of Modern Berlin, after 1989. The trail meandered through Leipziger Square and the southern end of Potsdamer between the Berlin Philharmonic and Kreuzberg. The guide explained the endless debates about how to weave the east and west portions of the city together. The debate isn’t over, but city planners, architects, and the general public exhausted themselves discussing this issue.

Some of the planning was brilliant and some dismal. What has to be appreciated is that the land was repurposed in a No Man’s Land in the middle of the city. The hype today gives faint pulse rates of a Hong Kong or Shanghai tilted on its side. I was grateful that this tour was offered as a “general” tour, even though it would have been a “specialty” tour elsewhere.

The buildings included the Arkaden, a huge modern shopping mall and fully integrated mixed use development. Residential, office, retail, entertainment are all concentrated in one place. Anchored by the Sony Center and the old Daimler site, these buildings claim WFA (world-famous architects) Helmut Jahn for the Sony Center, Renzo Piano Workshop for the Daimler site, and Richard Rogers for adjacent buildings. It’s a lively place intended for all citizens of Berlin to enjoy.

After missing the Berlin Wall tour departure today by a half an hour, I decided to do my own tour. The Mauer Park and Bernauer Strasse exhibit was literally at the next corner to my accommodation, and I had been meaning to go there. With free time on my feet, I discovered a very moving experience. Not only were the exhibits a reminder of the amazing power of humankind to solve its own problems, but the physical development and energy it took was very reassuring. Once again, I could witness modern history in a very immediate way.

Trump should come to learn the history of the Berlin Wall and all its trials and tribulations before considering building one himself. I don’t think he would do what he says after he saw what it took to undo one. He should listen to one of his cronies, Reagan, to “Tear down that Wall”.

Overview of the Park

Contrast of Old and New

Visitors with New building in background 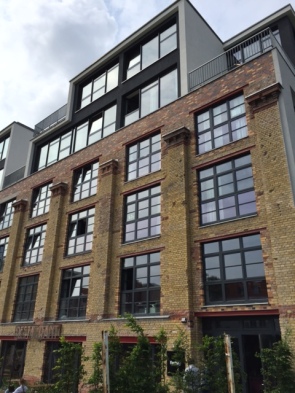 Some of the information from the displays on the Berlin Wall. 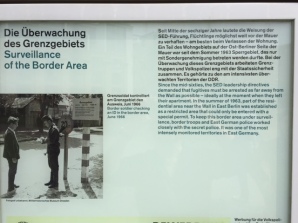 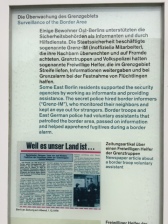 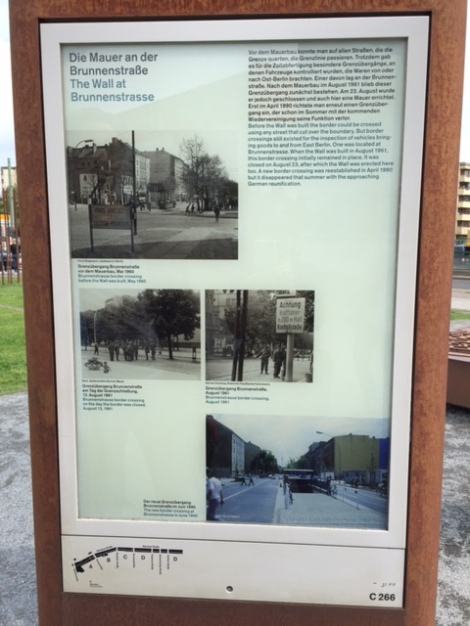 And last, but not least, a few of the ethnic shops just north of where I live. I went into one of the Arabic markets and bought cherries, loquats, poufy dried figs the size of your palm (almost, OK, maybe a fat baby’s), spargel, carrots and celery for soup for 12.75 euros. 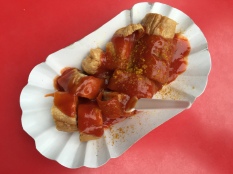 My first and last adventure the day before with Currywurst, a national institution, was a bomb. Yucky tasteless frankfurter cut into bite-size pieces (good for the convenience and service), smothered with ketchup (bad), dusted with “curry powder” (bad), and served by Germans (what happened to the “ethnic charm”?!?). FLOP. I usually think of myself as tolerant of any fast food, but this takes the prize for low point in human culture.