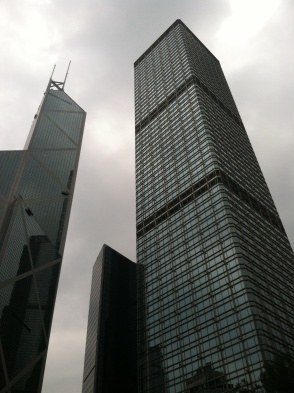 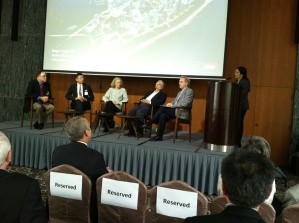 Hong Kong was one of my old stomping grounds, so I was particularly excited about seeing old friends. After graduating from architecture school, I arrived here with $100 left in my pocket and a determination to work here for a year. I ended up staying for seven. Gee Kin and I met in HK, and, well, the rest is history.

I’ll tell you more about the my day traveling on HK’s mass transit system and today’s seminar on Vertical Cities that I attended through the annotated photos:

1. This was the interior of the car in the MTR system. After nearly 40 years since I first worked on it while it was under construction in 1976-78, the system has held up well. I remember trying to introduce some of the BART system concepts to the British who controlled development of the system at the time. They were not interested in the BART fledgling system, which was barely 10 years old at the time. Being true colonials, the engineers preferred to utilize the London tube or British Railway system as their precedents.

Nevertheless, it’s an efficient, well-maintained system. It hardly showed any wear and tear despite its mature age. I was told that there are some delays and breakdowns that are only just beginning to appear, but the system has run well until recently. This photo is a general overview of the train interior.

2. Cell phone mania is not particular to China. 5 out of 8 were actively using their cell phones in this cluster of people. If I had taken photos in other cities I visited, they would have been similar, and maybe only nominally lower in numbers.

3. A shop, inside the MTR selling pastries. The two unusual items that caught my eye were green tea and fig rolls (that I tried) and squid ink, tomato, olive and pickle pizza (that I did not try)

4. A upshot of high rises near Garden Road.

5. Speakers at the Asian Vertical Cities Symposium sponsored by the HK American Institute of Architects at the Asia Society

The symposium consisted of an afternoon of presentations by local luminaries, followed by dinner and conversation. My good friend Peter Basmajian, a local HK architect who has lived in HK over 30 years, invited me to join him at this event. I also reconnected with George Kunihiro, a fellow architectural classmate from UC Berkeley. We had not seen each other for nearly 40 years! He happened to be visiting Hong Kong from Japan, where he now works.

A few salient comments from the symposium focusing on transit-oriented, high-density vertical cities included the following:

Dinner topics included table discussions on sustainability, livability, affordability, and mobility. Many of the cities discussed include those in China, India, Indonesia, Thailand and Malaysia.