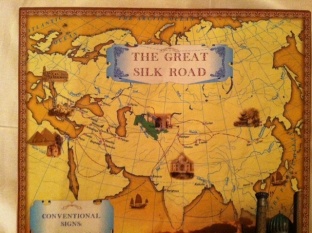 As a UNESCO World Heritage site, Bokhara has an extensive collection of Islamic Architcture.

Photos above, from top, left to right:

1. Map of the Great Silk Road: this week I am traveling along it from Tashkent to Khiva (Uzbekistan) and next week from Turpan in Northwestern China to Dunhuang.
2. the Ark (it wasn’t just Noah’s): the ceremonial grounds to the Fortress required visiting dig arises to back out after having an audience with the Amir. When the guest reached the wall in front of the exit, he knew he could turn around and leave.
3 and 4: the Ark from the exterior: big voluptuous corner and side wall fortifications
5 and 6: Samonid Mausoleum, one of the earliest remaining buildings in Bokhara, built between 9th and 10th C. Purported to be a masterpiece of world architecture and a perfect geometric form built of brick. Beautiful texture, but looked a little bit like an Irish fisherman sweater.
7. Interior Corner of Samonid Mausoleum: corner elements cleverly reconcile weight of circular dome over walls by being slightly smaller in diameter than width of square.
8. Samonid Mausoleum Tomb: both father, son, and grandson are buried in the tomb. he father’s tomb was originally in the middle, and the grandson was the third tomb, but they were they were all moved into one tomb and thus the offset position.
9. Kalyan Mosque is the largest mosque in Bokhara and second largest in Uzbekistan. The old wood columns are typical of the period and were periodically replaced.
10. Kalyan Mosque: Praying is conducted outside due to the mosque’s popularity. On Fridays, the mosque can hold up to 12,000 people. A electronic board indicates the times of prayer.
11,12, and 13: Courtyard and surrounding galleries of the Kalyan Mosque. (Header also shows overview of Courtyard, where worshippers pray)
14. Medressee Miri-Arab Madrasah: Opposite the Kalyan Mosque, this highly regarded spiritual Islamic University was built in the 16th C.