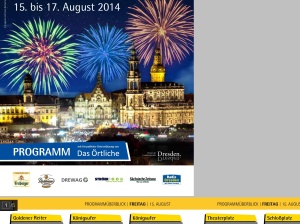 The  City Festival, between  Friday and Sunday  August 15-17, was launched in earnest, casting a whole new dimension to the city I had never before seen.  Most events occurred late at night around 11pm, drawing huge crowds of young people to rock events, carnival rides and cheap food. Plenty of security police were around to maintain civil order despite lots of beer consumption.

The theme this year is the Canaletto Festival. Dresden is known as the Florence of the Elbe. Canaletto was known to have painted a famous scene of the Elbe River, and the scenery is forever tied to the romantic view of Dresden.  Naming the festival after the Canaletto painting pays homage to the city’s cultural and artistic heritage.

In our class Friday we were asked to work in groups to describe three recommended events for the festival. We had to defend our position on why we thought our recommendations were the best. My group recommended a rock band, Tai Kwon Do exhibition, and a rubber ducky competition between two teams. Natürlich auf Deutsch.

My friend Helena arrived from Zürich for the weekend.