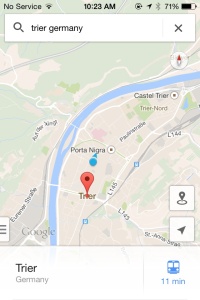 Trier’s history is one of the most fascinating stories in Europe. Beginning with the rule of Julius Caesar in 50 BC when he ordered Roman walls to be erected to protect its soldiers and citizens to destruction in World War II, it transcended the presence of Constantine, who held court in the reception hall in 300 AD; the monk who lived in medieval times in the Porte Negra; the rape, pillage and trading of the Vikings; and the arrival of Napoleon.

The major buildings include the Porte Negra, the only remaining Roman wall today; the Basilica, where it served as a pilgrimage church during the Crusades; and the Reception Hall where Constantine met his guests.

1. Map of Trier, with the Moselle River inning through it;
2. The Basilica
3. The Konigstherme