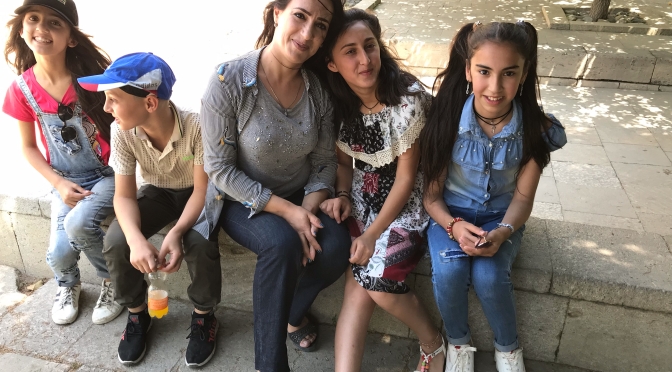 We headed to the high point of the city for an overview of the city skyline. At -28m below sea level, it is inperceptible that the area was covered by water, then receded multiple times in the past. The Caspian is called a sea for this reason–that the salt water from what was once part of the ocean differentiates it from from a fresh-water lake.

The Martyr’s shrine commemorates the 200 fallen rebels who led the second revolution in 1990. While being freed from Soviet rule and becoming independent, this was not the first attempt. Azerbaijan was established as a nation in 1920 as told by the Ali and Nino story I mentioned in the last post. Its success was short-lived however. The Russians came back and dominated the country for another 70 years before they relinquished power.

The Flaming Towers are Baku’s latest hotel, office, and condominium high rises that proudly display the city’s oil wealth and future. The capital of Azerbaijan was moved to Baku in the 12th century to this prominent peninsula on the west side of the Caspian Sea.

Designated a UNESCO World Heritage Site, the old City in Baku has renovated its historic buildings for public view.

Founded by an Azerbaijani woman, this museum contains over 8,000 volumes of miniature reproductions from books collected throughout the world, including Western, eastern, and local literature. This museum is cited in the Guiness Book of Records!

Hadid created a vision and inspiration for the next generation of architects. Its womby curves and vast proportions offers a three-dimensional fly-through in real time. From the exterior, the building looks like a huge beached whale.

I couldn’t help but become fixated not only by the historic costumes and expressive faces of the dolls in this collection, but also by the exquisite, life-like hand gestures.