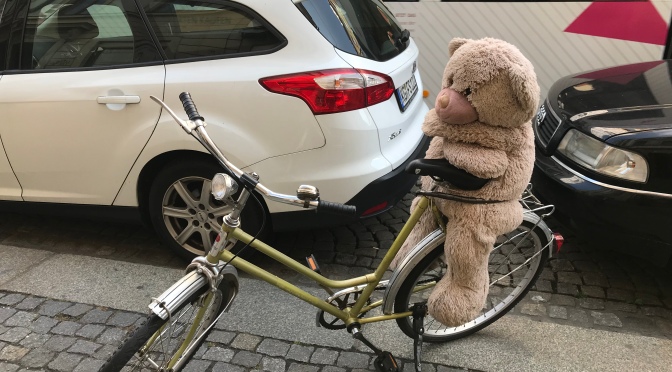 The location of Dresden’s landmarks are confusing, because the old part of the city was rebuilt after WWII and should be called Neustadt. But the neighborhood to the north of Dresden on the other side of the Elbe River is already called Neustadt. It was named that after a big fire in Dresden in 1685.

The beloved original Baroque buildings have been imitated every 200 years or so and throughout generations in between. So it is barely detectable whether they are from today (21st century), yesterday (19th century), or from its original reconstruction (1685). Dresden is fixated on the urban massing and proportions of five-story blocks with mansard, gabled roofs. It has committed itself to an elegant and functional building form worth repeating.

The plazas and central area of Dresden surrounding the major museums, the Frauenkirche, and the Semper Oper continue to impress old and new visitors to this historic imperial city. The large pit that was left open for a few years in the middle of the city due to archaeological excavations have been filled. In its place are replicas of the old Baroque buildings that were bombed during WWII. (See header above).

The Neustadt area where I live is jammed with young residents and visitors. It’s a lively scene where I live every night. Party-goers on bicycles invade the corner and perch on the curbs for hours on end. While the noise is evident, the scene is manageable. The bauhof or courtyard in my apartment building provides just enough sound separation to make unwanted noise undetectable.

The true test will be the annual local festival in the area next weekend, when the neighborhood comes unwound for three days. Clubs and restaurants will offer free music in nearly 20 different locations.

In the center of town, numerous free musical events took place throughout Altstadt (the old new part of the Old City). We caught a couple of young and old rock bands, two choir groups, and a brass chamber music ensemble. The often shuttered Japanese Palace was open on the weekend to host some of these events.

I’ve been buying my groceries at the corner Bio-Markt. It’s a minature supermarket complete with organic produce, fresh meat, dairy, and bread. I avoided the bread and wine to promote healthy living, but I did buy some landjaeger, one of my favorite dried sausages. It is packed with flavor, great for a snack or outing, and demonstrates one of Germany’s culinary skills- sausage-making.

Slowly, the Germans are learning how to eat better. Their culinary adventures are just catching up to the rest of the world. Germany has the second highest number of Michelin star restaurants after France. Like the English, German latter day awareness is under-appreciated. The fruit basket on display at a fair is a reminder of how ugly fruit and vegetables are shunned, despite the visually-appealing presentation..

An irresistible ticket price of 10 Euros drove me to the Semperoper to see Angela Georgeiou, the Romanian diva, in Tosca. Despite being in my favorite opera house, sitting in the fifth row slightly off center, a “clean” stage without a distracting cast of thousands, and the bargain, the performance was disappointing.

2 thoughts on “Day 7-9: New State of Altstadt and Old State of Neustadt, Dresden”