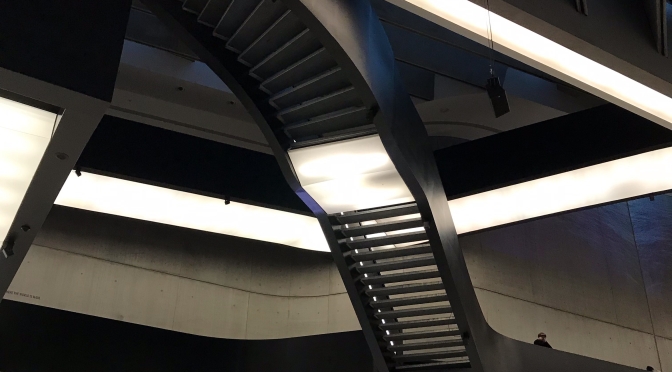 It may have been a shock back in 1975 when Zaha Hadid, a world famous Iraqi architect who died recently, won her first international competition in Hong Kong. Hadid proposed to place a hotel on the top of Victoria Peak by polishing the hilltop granite down to bedrock. Appalled as I was at the idea of this self-inflicted environmental disaster, Hadid managed to convince the jury that her bold move would, as it was, be a world-wide attention-getter. Fortunately the project was never built. Needless to say, nor was the project I entered with two other architectural students a winning entry.

Despite a spate of unbuilt designs from crazy-rich ideas, Zaha Hadid eventually settled down and managed to complete some sizable design projects. Among them are the Guangzhou Opera House, the BMW Factory in Leipzig, a museum complex in Baku, and the Maxxi Museum in Rome. Below are photos of the Maxxi Museum we visited last month.

Her wavy gravies were never among my favorite buildings and trended toward the Gehry-esque camp. But I have to admit that the staircase in the Maxxi Museum was impressive and much more successful that Snohetta’s version at the SFMOMA. The overall design seemed well suited for the video installations displayed in the museum. I missed posting these last time, so I hope you enjoy seeing the interiors. Make a plan to go there next tine you are in Rome. It’s a refreshing antidote to the Renaissance and ancient architecture.

Matera and Plovdiv starring as EU Capitals of Culture

The cultural heritage cities designated by the EU for 2019 are Matera and Plovdiv. Each year, they highlight undiscovered gems. Do you know where these cities are in Europe?

Daughter Melissa learned about Matera just before we flew to Rome, so we carved a day from our itinerary and flew to Bari. After that, it’s only an hour away by car. We covered most of the main hill town by walking. Locals are intent on managing tourism responsibly to preserve the natural beauty of the area developed over many centuries. You can see more photos of Matera in the previous post.

Both Plovdiv and Matera will feature open-air operas this summer. One of my favorites, Cavallera Rusticana will be presented in Matera in August, and in July the Roman Amphitheater in Plovdiv will present Aida and Rigoletto. This is a good chance to visit either city or both as they are filled with fascinating history and architecture. Here’s a good resource to learn more about both cities: https://europediplomatic.com/2019/01/04/matera-and-plovdiv-starring-as-eu-capitals-of-culture/

Back in San Francisco and thanks to SF Sketchers, I found my way to the Ralph Steadman retrospective presented by the Haight Street Art Gallery. Although primarily a political cartoonist, Ralph was highly appreciated for both his skill and wit. Although I had never heard of this artist before, I loved learning about his life’s work. I particularly liked the typically dry humor in the sketch about the Pastry Chef!

Steadman was fascinated by famous artists or political characters and traced their footsteps meticulously. He became the characters as he absorbed their psyche. Each scene he depicted seemed to represent a play he had written in his mind. He imagined Michelangelo throwing a fit in the Sistine Chapel, Nixon “discharging” Spiro Agnew, and one of Freud’s clients receiving therapy on the couch in the stuffy office where the psychoanalyst practiced. He even lampooned Trump.

And to record a few sketches made in the past week:

Be sure to catch a summary of travels for this year in the 2019 tab in the header at the top of the page!

2 thoughts on “Zaha has Deeds”