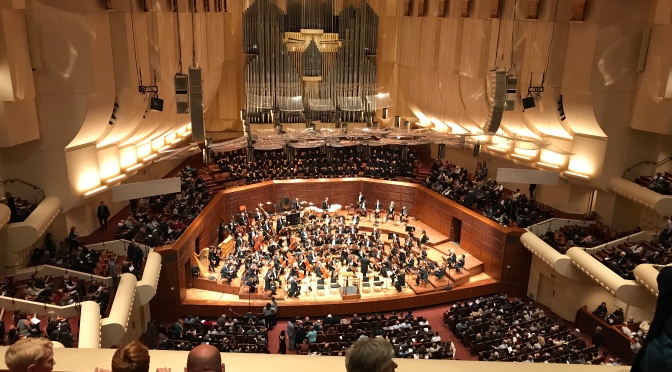 A delightful concert with the San Francisco Symphony playing Beethoven’s Ninth was a moving and timely experience. The full chorus sang the final Fourth Movement blasting the message from Schiller’s Ode to Joy in English: “Give a Kiss to the Whole World!” It was a much needed reminder of our dependency on each other.

During Intermission, the highlighted dome of the City Hall was gracefully poised behind and traffic crawling outside the Symphony Hall. Symphony goers were reflected in the windows as the two scenes melded into one.

KCET, a broadcast television station from Los Angeles, featured Mr. Jiu’s Restaurant on the Migrant Kitchen. Daughter Melissa works there as pastry chef in San Francisco’s Chinatown and was featured in it along with Brandon Jiu, the owner of the restaurant.  This was a pretty decent coverage explaining what drives young chefs into what they do, why they do it, where they go, and where they come from. I hope you will have time to watch the entire show posted here:

You can also watch it on KCET at the following times this weekend and after:

I have been sketching and drawing around the city, at various cafes and venues. Sometimes I join SF Sketchers, other times alone, wherever I happen to be catching some java. It’s great art therapy and a way to engage with humanity.

Fort Point, San Francisco
Although I was considering throwing in the towel at the end of this year, I may continue for a bit into 2019. I am planning a trip to Rome for a quickie in early January, so look for a post coming from there soon!

One thought on ““A Kiss for the Whole World””