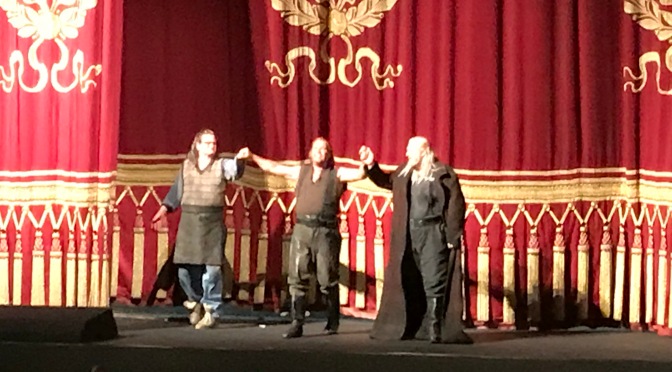 My weeks have been filled with German classes and opera. Classes begin at 1:15pm and go until 5:30pm. Homework assignments keep me busy in the morning and I haven’t ventured out much, except to the local neighborhood hangout in Rosenheimer Platz near the S-bahn station.

On the opera end, you will all be relieved to hear that the call has been answered. Tonite was the finale of the Ring Cycle. Götterdämmerung, or the “Twilight of the Gods” completed the saga of the search for wealth, love and happiness with the destruction of the world.

Earlier in the week, the third opera, “Siegfried”, began the story of Wotan’s grandson.The featured photo shows the curtain call after the first act. Siegfried was raised by one of the dwarfs who held and coveted the ring. Without his real parents, he was brash, confident, and belittled his adopted parent. It isn’t until he goes through life and discovers setbacks, challenges and love, that he becomes a real man.

I was discreetly placed in the King’s Box for the last two performances, after asking the concierge if I could change seats in order to see the English translation. Up until that time, my view was obstructed from seeing the English supertitles and I was relying on the German text. Seeing both gave me the maximum benefit.

The  third opera started at 5:00pm, and I wasn’t out of there until 10:35pm! The last two operas are the same duration, so if you are contemplating going to the Ring, be prepared.

Here’s the curtain call for the final performance of Götterdämmerung, with thunderous applause for magnificent singing by superstar Nina Stemme. As Brunhilde, she sang for half of the performance in a strong, powerful, perfect voice!  Notice the empty orchestra seats. Everyone heading home after performing six hours?!?

And most of the credit for the entire Ring Cycle at the Munich Opera Festival this year goes to Krill Petrenko, musical director of the Bayerische Staats Opera. His orchestra justifiably joined the stage and relished the kudos from the audience for the final curtain call. It takes a generation to cultivate these performers. You will be hearing more about this amazing conductor as he emerges into the world class arena.

And yes, it was worth it all. Time, place, and money.