The National Socialism Tour hosted by the Goethe Institute was one of the most stimulating tours I have ever taken. Given by Dr. Christoph Engels, the guide provided the overview of Hitler and how Munich was a central control and rallying point for the Nazi Party. 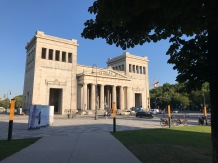 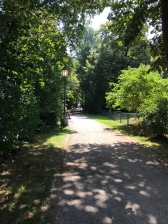 Using Hitler’s creations for the flag, logo, and uniforms, he combined propaganda and design to seduce the populace with fanfare and drama. The frequent marches down the main thoroughfare from Marienplatz to the Odeonsplatz were displays of might and staging trials for the military. I was a bit chilled to realize that the very backdrop for the Greek Festival I attended on my first day in Munich was where Hitler conducted many ceremonies.

The monumental boulevards reminiscent of Paris contributed to the public parades of the military. Billions of dollars were donated to the Nazi Party by private citizens, who saw the salvation of Germany led by Hitler. The original headquarters of the Nazi Party still exists, and while not open to the public, it continues to host activities of the Neo-Nazi Party members.

There were three phases of recovery by the German people after the devastating reign of terror. First, there were those who experienced it, followed by the children of the war survivors. They experienced a long period of “Scham und Schuld”, or Shame and Guilt. After 1968, the third generation began to ask the grandparents what role they had in the war. These questions were difficult discussions that needed to be answered by each family.

When the official statistics about the Holocaust victims at 6,000,000 people was mentioned, a couple of my classmates from Russia and the Ukraine noted that there were many more Russians killed by Stalin before and after WWII. They wanted to put history in perspective with their experience and knowledge. They also noted that the war itself saved many Russians from starvation and death caused by Stalin.

The Ring by Richard Wagner is a 17-hour epic, presented in a series over four days. The 2.5 hour, no-break opera in German subtitles was a challenge.  I had prepared myself for the “real thing” after seeing my first Ring at the SF Opera last month.

The difference between the two? San Francisco spent alot more effort in the production, the acting, the stage sets, but the singing was weak. Munich was the opposite. The stage sets were minimal, but Munich delivered some of the best singing I have ever heard. The opera house is smaller than San Francisco’s, and the singers must have their voices perfectly calibrated to the acoustical capabilities of the house. It didn’t hurt to have estatically beautiful music for both, thanks to Wagner.

And here’s a clip of how it looked from the audience during the curtain call. You would have to turn your sound up to full volume (but don’t do it!) to capture the thunderous foot stomping that Germans do in addition to clapping. The gesture is highly successful because: 1. you don’t have to stand up and drop the program in the process while still being able to respond spontaneously; 2. you don’t block others behind you who don’t want to stand or have a different opinion; and 3. It gets your entire body stimulated and the blood flowing so you can remember to get up to leave!

Last week, good friend Helena had suggested going to the Lenbach Museum during her visit here. Unfortunately, we weren’t able to fit everything in. She has pretty good taste in choosing museums, so I decided to venture there on a free morning. I combined a trip to load up on German sketch books at an art supply store near the museum area with a visit to the Lenbach.

I could only remember that Helena had told me about something Blue that was on display there. After all, Helena and I had just seen Vermeer’s Woman in Blue Reading a Letter the week before, right? At first, I thought it was the Blue Wonder, then I remembered, no, that’s a bridge in Dresden. After I ripped through a gaggle of galleries searching for the missing identity, I finally asked the guide where the Blue Rider was located. His answer: they’re everywhere! I was perplexed at first, then realized that its…a movement.

The collection generated a lively FaceTime conversation with my German language partner in the Bay Area. Being an art history aficionado, he set me straight. The text may be hard to read, but if you are interested, you can view it on a monitor. They’re all yours, Jim! 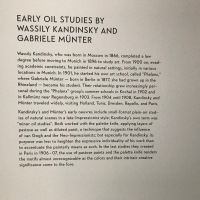 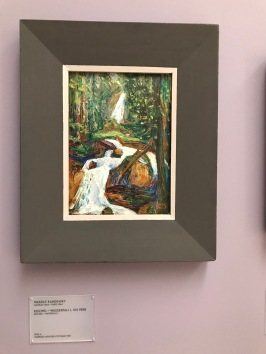 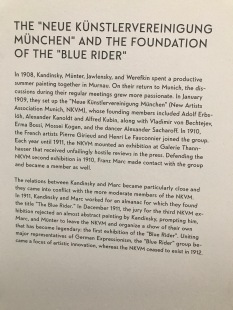 Kandinsky at the Bauhaus