Tower of Silence and Fire

At the Temple of Silence, members of the Zorastrian religion placed their dead at the top of a mound and left them to the elements and vultures to decompose. After that, they treated the bones with alcohol and burned the remains.

The Temple of Fire was built to commemorate the Prophet Zarathustra. As head of the Zorastrian religion, he professed kindness and goodness to all. What was more interesting and an “Aha!” moment for us, was that “Thus Spake Zarathustra“, written by Richard Strauss  and the theme song from “2001, the Space Odyssey”, originates from this prophet’s words and teachings. Zorastrianism was one of the first monotheistic religions in the world. 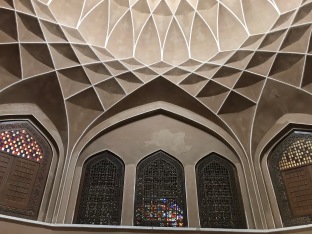 Zorastrians were also present in Hong Kong. I used to pass the Temple on my way to work and wondered who the members were. There are only about 200,000 members of the religious group world-wide, among which 80,000 or so are South Indians. Their presence in Hong Kong stems from the Indian population that lived there since colonial times. I can finally rest my curiosity  over who this group was and where they came from.

As in all mosques, the mullah, or head of the temple, conducts the ceremony facing Mecca, while the worshippers are aligned in rows behind him. They are encouraged to attend the mosque five times a day in groups, but more importantly on Friday, the holy day of the week. The worshippers are called to prayer every day, including before sunrise and at sunset.

The twin minarets or towers of Shiite mosques come in pairs, like this one, or in fours on the corners of a square. These are over 70 feet high and the among the tallest in Iran. Sunni minarets have one, two or even three asymmetrical towers, so you can easily differentiate which sect of Islamic religion each mosque represents. The architect of this mosque built the first minaret, and commanded his top student to build the second one. The precocious student followed his master’s design, but built two double-helix staircases to the top inside instead of the single staircase in the first tower.

The ice house was a clever way to provide refrigeration in the blaring desert heat. The dome over the pool where the ice was kept allowed heat to escape through the opening at the top. The space below where the water was originally kept is now empty, but it creates an acoustically perfect space. Our guide was barely whispering in the video below, but you could easily hear his song from wherever you were standing. (Please turn up the volume to full blast if you want to hear the song more clearly)

Heading towards Isfahan, we stopped at an authentic Silk Road Caravansery. The traders and their camels rested and recuperated here, and rest stops like this are considered one of the first hotels ever established! The camels were parked in the courtyard, traders used the rooms facing the courtyard, and the hired help hung out in the dormitory space on the outer ring of the courtyard.

Water was transported here from underground canals or wells. The pools provided cool spaces (literally)  to escape the heat. Washing and drinking water was stored separately from these submerged and naturally lit chambers. In this part of the world where drought is a daily worry, water was carefully stored and managed. Shops and local handicrafts are sold now in the courtyard. Our guide Abdullah, showed us his newly purchased solidarity scarf. 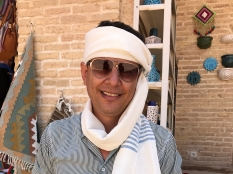