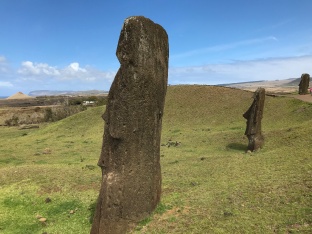 A full day of sightseeing led me to the various Moai on the Eastern side of the island. The Akahanga Quarry where the stone for the Moai were carved and extracted was a graveyard of sorts for the stones themselves. They were in various stages of completion: some were still in situ, some were being transported, and some were never to reach their intended sacred sites. The characteristic topknots for hair were gathered in one spot, as the red stone was normally placed separately from the body on top of the basalt.

I loved pondering how each sculptor decided on the eyes, nose, and mouth for each piece. Most of the bodies included full torsos, but no legs. Their hands were placed below their bellies, with long fingernails indicating royalty. The long ears of the royalty were evident, as there were no short-eared Moai (see previous post).

Behind the quarry are caves where people hid during wars and invasions. Next, we reached the highlight of the 15 Moai at Ahu Tongariki.  The guide explained in detail how the moai were carved out of bedrock, transported to a site where the dead were buried, and then erected with great teamwork and collaboration. 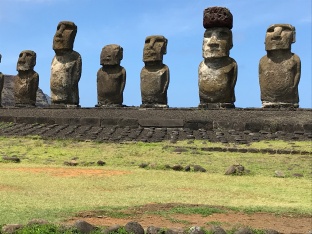 The Easter Islanders had a long term vision of creating these images to protect successive generations. It took incredible energy, creativity, and determination to plan, design and execute such monumental exercises. The photos above do not convey the extensive area where they were situated. See video below (apologies for the wind–you may need to turn your volume down to reduce the noise)

A Japanese construction company helped to sponsor the UNESCO world heritage site, after it exhibited one of the Moai in Japan. Many of the Moai that were toppled were turnd upright and restored so they can be appreciated in their orignal splendor.

I returned to the Te Moana Restaurant in town for an another adventurous dining experience. This time I ordered whole fish, and was delighted with this pair on a bed of mashed tuber: 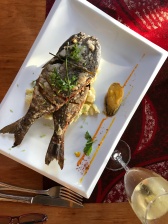 My sunset view at dinner gave me time to reflect on all the amazing human achievements from the past. Even better, I caught the last rays behind the Moai at the harbor just a block away from my hotel.  It symbolized another successful completion of travels with myself and others to two of the most magnificent places in the world. I hope you enjoyed traveling with me! 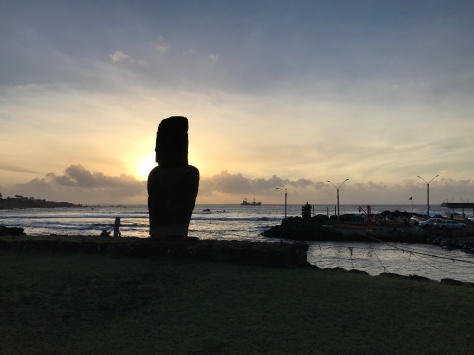