Arriving in Lima reminds me of the rush I get when entering a new country, and the excitement over the opportunity to learn about another culture. Not having been to S. America except for a brief cruise stop in Caracas for a day, I finally organized a trip to this part of the world on my own.

No sooner had I arrived at the hotel when a feeling of calm and confidence struck me. The people were friendly, moved at the pace of a lilt and rhythm I enjoyed, and I became calm. Despite not much visual stimulation in the city itself, I decided to save the thrills for the ascent to Macchu Picchu later on the trip.

My full day free in the city focused not surprisingly on two historic and archaeological museums. The Larco Museum was founded in 1926 by a 25-year old archaologist who was given an Incan artifact from his father. Fascinated by this mysterious object, he pursued a career discovering a wealth of not only the Inca civilization, but the several significant epochs before that. We only seem to know the history about the conquests of the Inca by the Spanish conquistadors, but in fact the reputation and foundation for the Inca were built by many earlier societies.

Peru is divided into roughly three geographic areas: the coast, the highlands, and the jungle. The jungle occupies over half of the country, and the Amazon’s source lies in the Andes Mountains. Most of us only think of the Amazon and the rain forest in Brazil, when in fact it is also in Peru.

The various stages of formative and established cultures relative to other parts of the world are shown on the attached chart. 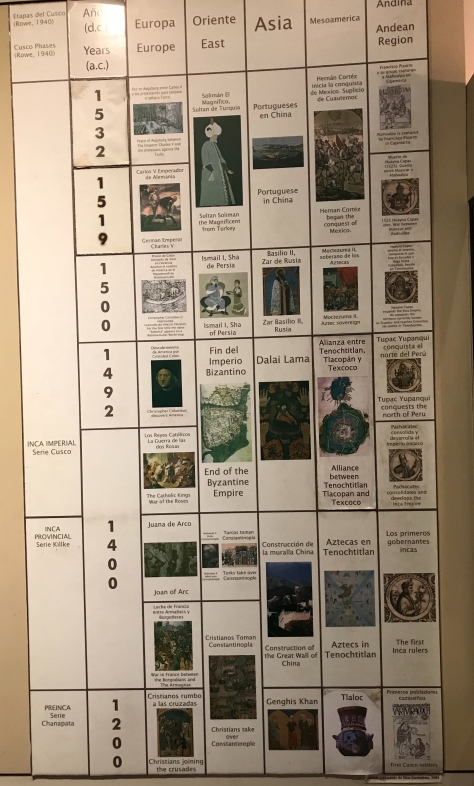 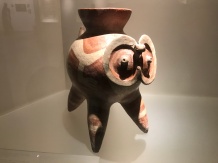 Urns from high priests were used for drinking fluids from humans and animals. Buriel sites show human sacrifices and the dead placed in a fetal position upright, then covered with cloth and woven textiles as thick as carpets. Enjoy some of the many pieces that I particularly liked from the extensive collection from primarily the Larco Museum, and its lovely garden.

A selection of Decorative Pottery

Ceremonial Poncho made with feathers

The hotel recommended the La Mar Restaurant that was open only from 11-5pm, so it fit my schedule perfectly. After an exhilharating visit to the two museums, I was ready to chow down some of the best food in the world! As soon as I was seated at the bar, I was greeted by a friendly young woman sitting next to me. She was visiting from Brazil on her own. We struck up a conversation that led to an agreement to meet for dinner two hours later at one of the sister restaurants, La Panchita. 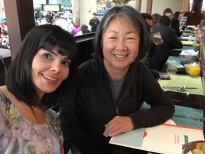 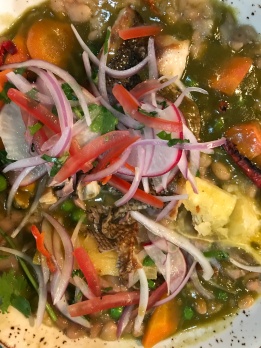