Returning to Hong Kong has a romantic flair to it, as this is the city where Gee Kin and I met. I was a young architect starting in the profession, and Gee Kin was reinitiating his career as a structural engineer. There’s no doubt we were impressed with each other, particularly with our mutual sense of humor. While our relationship developed slowly by today’s standards, it gave us sufficient time to think about who we were and whether we wanted to spend the rest of our lives together or not. It must have worked, because we are still together over 35 years later.

Shortly after arrival in Hong Kong we encountered a typhoon. Known as Merbok, it was the first of the year. Everyone scurried to get groceries and head home at the end of the day. It was quiet and the streets were dead empty by early evening. It felt like Chinese New Year’s but without the festive atmosphere where shops are closed and everyone is at home with family celebrating.

After a couple of days of torrential rain, I was able to head outdoors. My first exploration was to the art studio downstairs, where I learned how to copy a Chinese flower pattern and paint with watercolors for the first time ever. It reminded me of second daughter Julianne’s brush painting from her high school days. I felt a bit awkward at painting in water colors, but the instructor was very kind and explained everything very clearly in Cantonese. It gave me a chance to reuse the lively language I learned while living in Hong Kong.

We decided to visit Fulham Garden in Pokfulam, where I lived when I worked for Hong Kong Mass Transit Railway. It wasn’t far from Central, but I had trouble remembering where the bus stop was located. The buildings are taller and there are more of them. Fortunately, there are still pockets that reflect and preserve old Hong Kong. After a quick look, we walked back to Central. 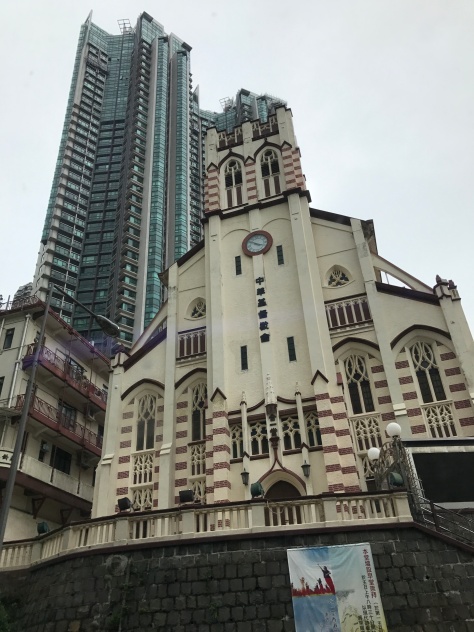 There are public parks such as Blake Garden tucked into the hillside, as well as many of Hong Kong’s prestigious private and parochial schools. The narrow roads provide relief for old banyan trees that have lived there for centuries. They cling to sides of walls like stubborn old centurions and continue to gasp for air and suck water.

Many new trendy boutiques and cafes line the pockets above Sai Ying Pun and Sheung Wan. These shops are dotted throughout the area where we are staying and are immersed between many staircases such as Ladder Street and the escalators that ascend from Central to Midlevels. The manual stairs are not as nice as our tiled steps in Golden Gate Heights, but purposeful. Finally, we scaled our Air BNB in the five-level walk-up after plenty of exercise on the hilly side streets.

Staircase to the Peak from Pokfulam 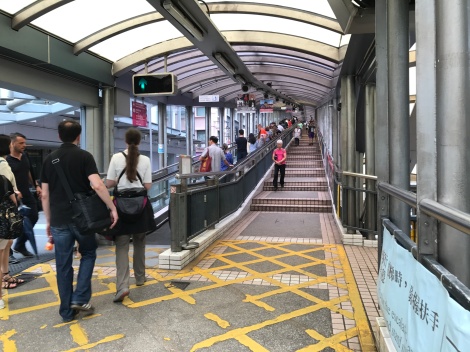