On Sunday morning, our art group headed out to the market by taxi. After a half hour ride, we were discharged into a completely local market with no tourists.  If it weren’t for a few precious plastic bags, you could feel as if you had time-traveled back a couple of centuries. We spent most of the time at the meat market in front of the abbatoir, where various sections of the animal were displayed (half-skinned heads, hoofs and rack ladders). Meat is eaten big-time in this part of the world, especially lamb and chicken.  Interestingly, the meat was so fresh there was no odor. For the chaotic scene it was for sketching, it seemed ironic that there were no pungent odors of innerds to discourage us. 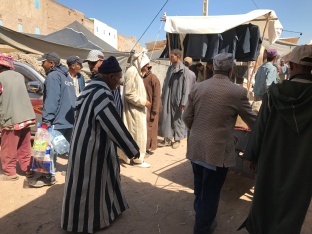 Our instructor, Diane, was in full form. After sketching a chicken, the owner demanded that she draw him instead. She was up to the challenge, and crowds of men gathered around her to watch. There were few if no women in the market, and if there were, they were widows looking after themselves and their families.

This was the most rudimentary market I have ever visited. The men did not like having any closeup photographs taken, so we were careful not to offend. A few stuck their hands in front of the camera when I inadvertently pointed it in their direction. 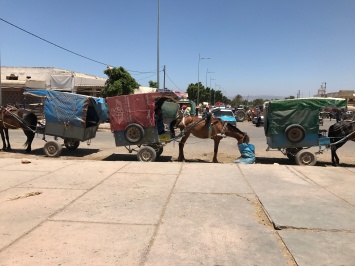 Home where we ate

We took the “Berber Mercedes” to a small village outside the market. The restaurants were closed during Ramadan, so our host in Essaouira arranged for a local to cook for us. The ride was exciting at times, as the donkeys knew they were heading home for lunch. We rode on the edge of a single metal wheel and got there after a Mr. Toad ride from Alice in Wonderland. Even though it was hair-raising, our drawing teacher was sketching!

Our lunch (see featured photo above) consisted of tagine with fresh eggs, and a huge platter of fruit. There are no utensils, just all-purpose bread you use to scoop up the sauce and as a napkin!

For those who want more background and history on Essaouira: