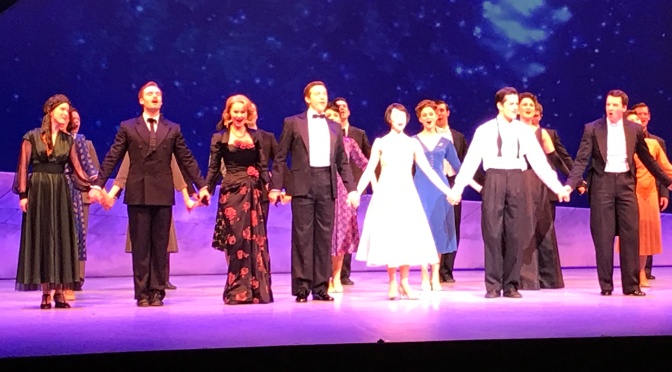 Blenheim must be one of those architectural gems featured in An Outline of European Architecture  by Nicholas Pevsner. I wanted to run to my tattered and worn copy on my shelf at home to see if it was. The book got me through most of my Architectural History classes, just at a time when I wondered why studying palaces like these were useful endeavors in life.

A rare English Baroque palace, Blenheim was built by John Vanbrugh. He was a controversial pick over Christopher Wren, who designed and built St. Paul’s Cathedral. Van Brugh managed the project poorly and he himself had to be managed during the process. In the end he left the project in disgrace. It’s funny, but I’m sure I didn’t learn the project management details in architectural history, but it figured prominent in the storytelling about Blenheim.

Van Brugh was probably better known for his layout of the rooms. He originally designed an entire length of the building intended as a picture gallery. It didn’t work out. Maybe there weren’t enough portraits of the family. The walls were converted for use as a library. One of the photo shows how it looks like…well, an afterthought.

The Duke of Marlborough, an original Churchill, lived here. He was granted the property after winning the war against France and Prussia around 1704. The battle took place in Blindheim, Bavaria with 50,000 troops on each side.

Sir Winston Churchill was also born in Blenheim–I didn’t realize that he was born with a silver spoon in his mouth, as they say. Sadly,  I didn’t find this palace very impressive, even though it is now an UNESCO World Heritage Site,

To reach Blenheim by public transportation, it takes a side trip from London through Oxford by train, then by bus to Woodstock. We stayed overnight in Woodstock (half an hour from Oxford) to visit the Palace early the next morning. Woodstockers are proud to claim their namesake that preceded Blenheim by about 500 years, and  ‘way before the piddly little NY town claimed the name. It’s famous for glove-making.

Before the palace was open, we took an early stroll through the grounds. The rolling hills were fun to navigate among the pastoral sheep and a stray pheasant here and there. Not much going on except extensive stretches of green lawn as far as the eye can see and shady trees as shown above. No one was in sight, until we arrived back at the entrance where the tour buses were just unloading the hoards. It started to feel a little bit like St. Petersburg again so we hustled our way out of the throngs quickly. 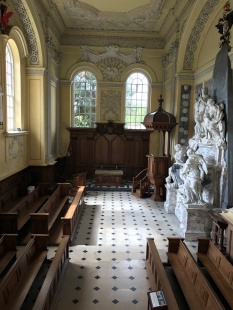 Our friends in Bath had recommended the Ashmolean Museum in Oxford, so we stopped there after Blenheim on the way back to London. The museum has an impressive ancient art and archaeological  collection and many representative pieces I had not seen elsewhere. I could also continue pursuing Silk Road connections and learn more about the string of cities along it.

From what I recall,  art history seems to formally begin around 3000 BC, when Egyptian civilization became established.  One of the earliest pieces in the museum was from as early as 8000 BC, during the Neolithic period in Metsopotamia. Here are a few of my favorite pieces from later periods: 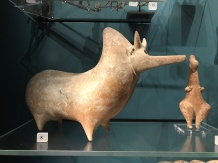 On return to London, I planned a special return visit to Fez Mangal, an “authentic” Turkish restaurant in the Ladbroke Grove neighborhood. I craved its fresh mezzes and kebabs as much as those in Istanbul. Friend and fellow traveler Karen will remember this restaurant from our 2014 visit to London. While we waited for a table SRO, we ordered our sea bream and mixed grill (with lamb, chicken, and mixed lamb kebabs) dishes in advance of being seated. 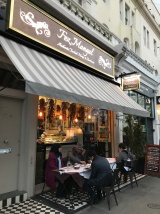 An American in Paris (see curtain call in featured photo above)

Unfortunately, despite excellent dancers and singers, the confusing and dated dialog from the original production couldn’t be improved. Save your money and watch the movie.

By the way, I forgot to mention in my previous post that Bath is also a world UNESCO site.

In keeping with my celebration list, I’d like to wish dear Dresden friend Hannelore, who keeps me motivated and learning German, a “Happy Birthday” or “Alles Gute zum Geburtstag!”

6 thoughts on “Days 17-18: Asian-American in London Sees An American in Paris”