The special Monet exhibit at the Legion of Honor in San Francisco is worth seeing if you are in town through May. You get an extra bonus on a beautiful day with views of the Golden Gate Bridge. 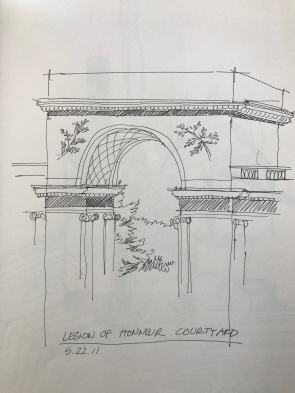 Monet’s early years were revealing. He wasn’t always the fuzzy artist we have come to know. He was very accomplished and painted his family and landscapes on trips to London and Holland. His studies of flickering light on water and objects were exquisite. These led him to the later impressionistic work as his eyesight failed him.

He worked so skillfully en plein air that all the paint was still wet on the canvas when he put his brush down! Amateurs could only dream of mastering painting like that. 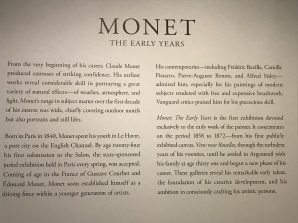 View with a Room 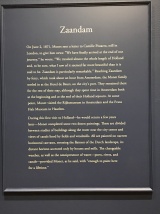 You might think its pretty hard to avoid the news media these days, but I am proud to say that I have gone dark for over a solid month now. After battling a serious addiction to the news, I decided to kick it completely. I couldn’t take the noise and felt like I was going deaf from it.

Short of a few minor infractions by headlines that popped up on innocent websites not known for news (my bank, Instagram, or Twitter for the non-news sites I visit), I went cold turkey. That included TV, internet and newpapers!

The filtered, second- or third-hand information you inadvertently receive from conversations with others protects you from heading into a 100-year flood or dam collapse. My best solicited sources of news and weather reports in California were from friends in Germany! They certainly were much more concise and only told me that I need’t look for Noah’s Ark yet.

I finally broke the ice today and listened to Deutsche Welle’s Langsamer Gesprochen, or news in German spoken s-l-o-w-l-y. I got both curiosity and language learning covered at-the-same-time.

At our German class last night, we had an interesting assignment. Specifically, we were learning the words for musical instruments and prepositions. In general, the story we were to read with a partner involved a group of residents in an apartment building in a German city. Each of the residents played a different instrument. When they each practiced, they caused havoc and complaints between neighbors in the building.

Next thing we read is that a foreigner moves into the building. He plays the guitar. Suddenly all the neighbors who never spoke to each other become friends and band together to complain about the new neighbor. I love learning German for all the analysis and critical thinking they throw into exercises just to make sure you are paying attention.

The guitarist eventually moves away, and the neighbors go back to being the way they were–unfriendly，complaining, and not speaking to each other.

Clearly there are cultural differences between moral judgment and how we are taught in Germany and the U.S. But if the teacher hadn’t explained it to us, I would have thought it was a racist story! What do you think?

I discovered from one of Ruth Reichl’s tweets that a Korean-Uzbeki restaurant exists deep in the heart of Brooklyn. I immediately calendared this intriguing cafe on my list of go-tos once we arrive in New York on our upcoming trip eastward.

The article from the NY Times attached explains how Koreans ended up in the far-flung former Russian state in Central Asia. If it hadn’t been for Julianne’s classmate, who had been to Uzbekistan on a Korean Christian mission, we never would have connected the dots.

But indeed the Koreans were purged from cities like Moscow and Vladivostok during WW 2 to isolated Uzbekistan. If you remember from my first travels in 2013, I visited the Silk Road cities of Tashkent, Samarkand, Bokhara and Kiva. I can’t wait to get another sweet reminder of the delicate flavors from there, combining plov (pilav) and root vegetables with kim chee and barbequed meat!

Here are the photos (reformatted with new editing tools) originally posted from travels to the Samarqand market Bazaar in Uzbekistan in 2014. The market in Tashkent was even larger– one of the biggest in the world that I have seen! (Click on photos for captions and larger images) 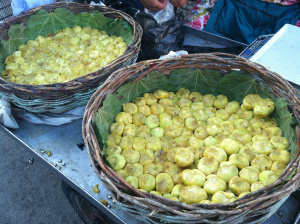 Figs as big as Babies’ Fists

Yogurt-Plain and Fancy with Red Pepper

Bouquets of Birthday wishes in March to: Farris, Marilyn, Julianne, Frances, and Corene!