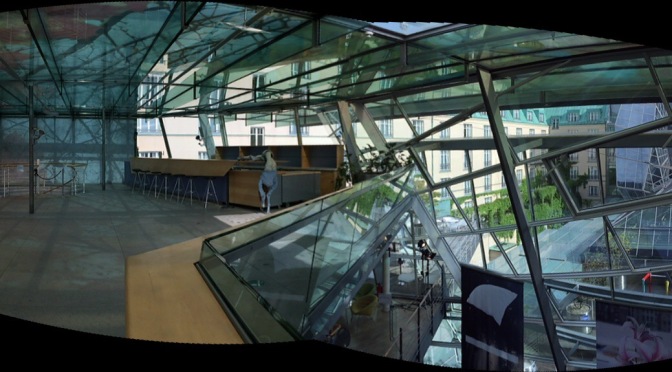 For the next two to three days, I am indulging in completely free and independent personal pleasures. After a month of military-style training and discipline during  my German class, I am free from academic obligations. I am racing around to the last few spots that I missed on my own, then the final 24 hours will be a day trip to Dessau. I’ll be visiting the historic Bauhaus Workshop, School and Houses there, and I will make a separate post for that.

The Berlin Biennale has been in full swing this month. To catch up, I made a pilgrimage to Fasanenstrasse, a small, elegant street near the Zoological Gardens and Uhlanstrasse Station. A few of the galleries promoted in the Art Forum “picks” are located here, including the Galerie Kornfeld, that was showing “The End of Flags” by Hubert Scheibl.

The Bucholz Gallery, where Melissa and I visited in January, presented the work of Wolfgang Tillmans. He was born in Remscheid in 1968. His work covered photographs of his studio and the accumulation of paper.

Not particularly inspiring, but I found the gallery itself much more exciting. It is a historic, protected building with beautiful Art Nouveau tendrils on the ceiling, panels over doorways, and in the carved oak staircase in the vestibule.

Contrasted with the stark white walls, it was easy to appreciate the delicacy and the artistry in the original building decoration. Contrary to my altbau where I am staying, this is what I would consider a classy version. There are also some really elegant auction houses and galleries promoting collector books and Asian antiques, gorgeous art nouveau jewelry and beautiful period silver by Georg Jensen and Henry Van de Velde.

Copies of fans from Shanghai 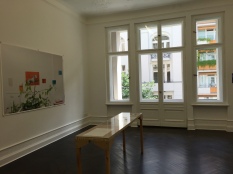 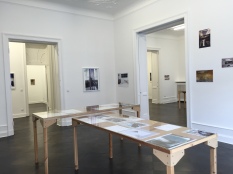 After walking down the street and looking for a memorial plaque for Essad Bey or Nussibaum, I was very happy to discover it directly across the street from the Cafe for Literature and the adjacent Museum for Kathe Kollwitz. The Berlin literati must have hung out in this neighborhood. It felt like the Montparnasse area of Paris, except more compact. 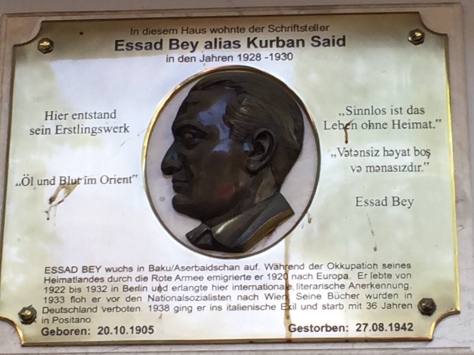 Essad Bey was a journalist who was both Jewish by birth and Muslim by election. He had a fascinating life history that is chronicled in the New York Times bestseller by Tom Reiss, “The Orientalist”. I was surprised that my German teacher had read the book when I told him it was my favorite book . Some of you have heard from me already about how much I loved this book.

Born in Lake Baku, where one of the first oil discoveries was made, Bey lived an early riches to rags life. His family escaped after the Bolshevik Revolution to Turkey, then Paris, and eventually he was educated in Germany.  He became a journalist, was writing histories of Hitler and Mussolini, fell out of grace, and then died a tragic death. It’s a fascinating book where fiction and reality are often obscured.

Later in the morning, I walked about a mile east to KDW, Berlin’s version of Harrods or Galeries Lafayette. The top floor is devoted to gourmet food, with stations that offer a variety of seafood, meat, and a host of regional specialties. Up until now, I haven’t put much (or any) focus on eating. This was my opportunity to catch up. 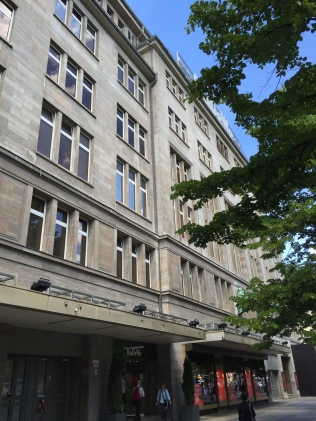 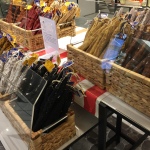 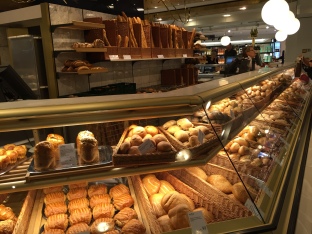 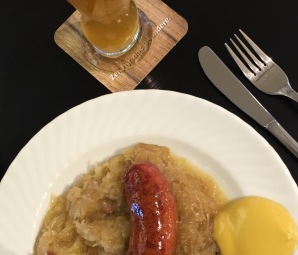 My lunch with Bier

The cases proudly presented cheese, sausages, and brot (bread). I looked for anything unique from the other gourmet food halls, but could only find wiener schnitzel and kartoffel stations. If you are into German food, you can get the gourmet version here. I succumbed to the bratwurst, senf (mustard) and sauerkraut, just as a show of loyalty. While this wasn’t exactly a pilgrimage to the annals of gourmet dining, I could still enjoy the German culinary ernestness. I bought a sample of Niederegger’s marzipan from Lubeck after hearing about it in my German class.

The Bauhaus Archive in Berlin was high on my list of places to visit. The exterior was odd, with the north-facing skylights a prominent feature of the design of the building. Thankfully,  a new museum is underway. After 883 international entries, a Spanish architect won the competition and beat out an American. You can see the entries, if you are interested, here: http://c4c-berlin.de/projekte/bmd-de/

The existing exhibition still contained all of my favorite things: design philosophy and principles from inception to reality; creative thinking; and highest quality craftsmanship. I was thoroughly engrossed and listened to every post on the audio guide (not a small feat, especially since it was in the afternoon!). Again, it reinforced my passion and dedication to good design. 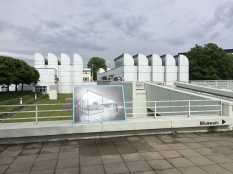 The Ninth Annual Berlin Biennale, as mentioned earlier, is underway this summer. In addition to the KW Center for Contemporary Art, the main anchor is at the Academy for Art, just inside the Brandenburg Gate. The exhibition in combination with the interior of the building was crazy beautiful and disgustingly fascinating. I couldn’t decide which photos to include, so here is a mix-match of both exhibits and building features (renovated by Beynisch Architects from Stuttgart in 2005):

Overview of Entry Area (from front) 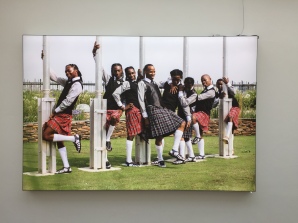 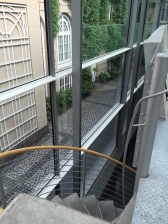 Overview of Entry Area (from rear) 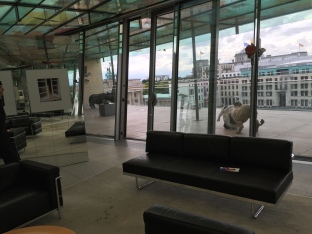 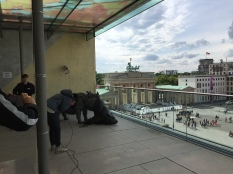 View of Brandenburg Gate from Terrace, with 3D Viewer 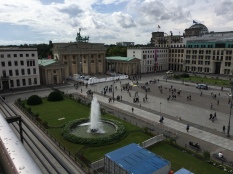 Click on the photos above for captions.  You can also increase the images by clicking on the series.

The terrace featured a virtual reality presentation. I stood in line for the 3-4 minute scene that was pretty entertaining and worthwhile. The scene showed the view from the top of Brandenburg Gate, fogged up, then dove to an underwater sequence. The person in the lower left photo is bending over to look through the viewer underwater.

The evening was topped off with a final opera. The Deutsche Oper unveiled a new production of the “Die Entführung aus dem Serail” by Mozart. If you remember what a rogue and rock star Mozart was in his day (drinking, women, and wild living), this production really conveyed that. They brought the days of Mozart to contemporary status, complete with nudity, sniffing cocaine, and searching for home (a la ET).

Initially, I didn’t want to go, as I had seen an old video of this opera. It was very hoaky and racist. One of the opera students in the GI had seen a preview of the preview and recommended it to me. She emphasized that it had been updated and was worth seeing. She was right, but there were still a few questionable moments in the opera left over from Mozart that were hard to accept or eradicate.

The bare naked bodies were less surprising to me, as “Tristan und Isolde” earlier had unveiled their own version of nudity. I’m not sure it’s becoming a trend for opera, but I wondered how the old ladies at the opera took these scenes in. They didn’t seem to raise any eyebrows, from what I could decipher. Everyone, including me, stayed WIDE AWAKE. If that’s one way to get a more alert audience, it definitely worked.

The story line is simple–a group of young people get captured by an extra terrestrial and are sent to a far away land. They try to find their way back. In the mean time, they are living a fast and senseless life with sex, drugs and videotapes. They search for a way back. It was a great production, very hip, and very well received. Look for this updated opera with fantastic music and even a few “Queen of the Night” arias sprinkled in for extra amusement. 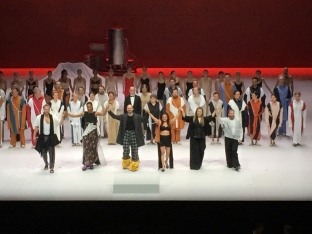 Note: look for the curtain call with the scantily clad girls–some of them only put on underwear in the final scene!!