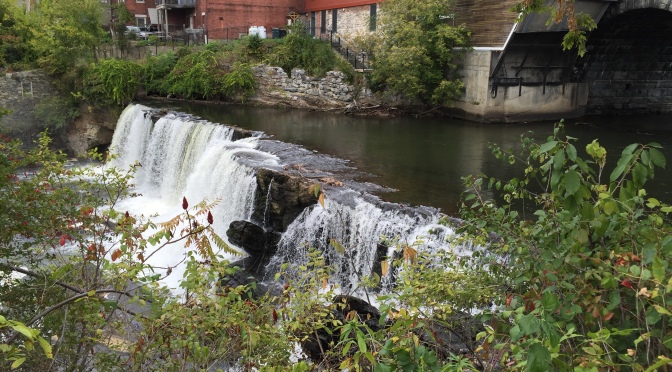 After a ride Upstate on the Ethan Allen Express from Penn Station to Albany, NY, my college roommate and I rented a car and drove east toward Middlebury, Vt to go “leaf-peeping”. The only ominous problem was that this year’s weather affected the Fall foliage. Much of the greenery along the Hudson River appeared to be damaged and dried from the unusual summer heat.

Apparently it rained in June, then very little over the summer. The leaves depend on cold weather to turn color. We started seeing just a tinge of color here and there, but were not too hopeful that we would see much in the next couple of days. Instead, we resolved to enjoy the casual air, windy roads, and 55mph highways.

We stopped in an apple farm along the way, had a long leisurely lunch at the “Lobby” with Otter Creek as our view, and then strolled over to visit the glamourous Middlebury College indoor track. 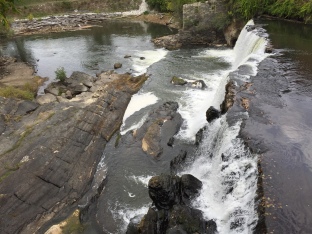 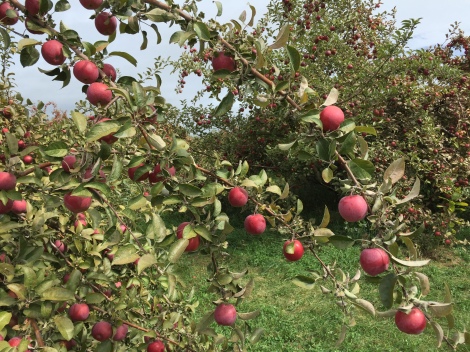 All along the way, I was reminded of the history of this area. “Last of the Mohicans”, buildings with ca. 1800 etched in stone, white clapboard houses, and picture-perfect Lutheran churches are abound.

I was struck by the resemblance in parts of Germany to New England. The early 19th and 20th C. signature church steeples in the small towns dotted throughout Germany were contemporary to those built in the US. It’s amazing to think that these areas were just getting their footing at the same time Goethe and Schiller were in full tilt in Weimar. It helps me to appreciate and relate to a book I am currently reading, “Two Boston Brahmins in Goethe’s Germany”.

Only a faint blur of red dusting the wooded hills were visible around the ski resort of Killington. Instead of a gondola ride up the 4162 elevation, I opted for a rickety chair lift in this ski town. It was half the price for half the height, and probably half the time, so it appeared to be a sound if not minimal investment to me. 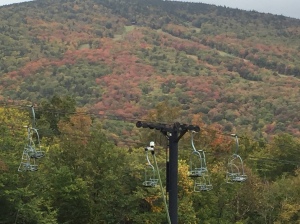 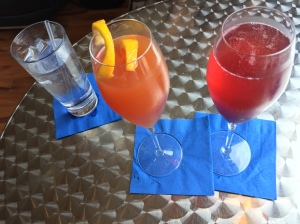 A late morning breakfast was jump-started by champagne cocktail, quiche, ravioli and finished with a delicious bacon and egg muffin sandwich cushioned with a sweet potato bed, in that order. 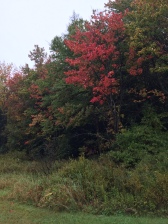 Sharp rust against an olive background 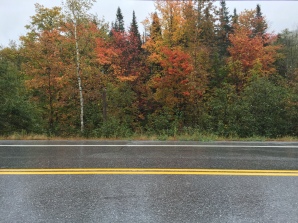 The next day, we left Killington to explore the Scenic Roads from Killington along Route 4 East to Woodstock, Vt. and South along Route 100 through the heart of Vermont to Wilmington. The leaves were most impressive along the Green Mountain National Forest.

We made a stop at the Shackleton Thomas Woodworking and Pottery Store, where they made hand crafted furniture and stoneware. Each item was lovingly produced in an atelier that carried on many traditional techniques.

Pottery based on Sung Celadon 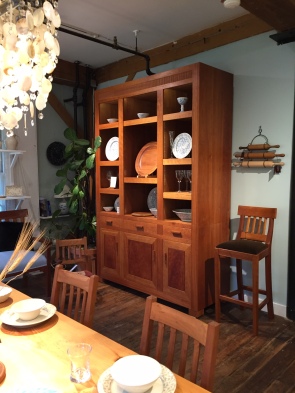 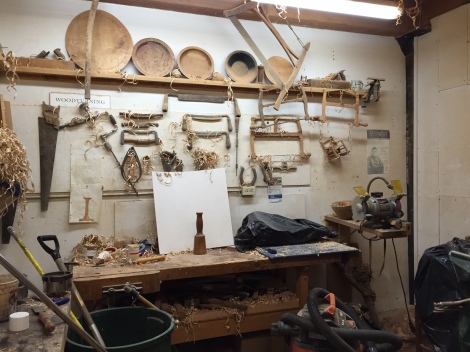 Tomorrow we will be traveling from Albany, NY to Philadelphia, PA by Amtrak through NYC. We have ordered tickets the following day for the Barnes Foundation Collection and the Philadelphia Museum of Art, so art lovers, get ready!!