Today was a continuation of yesterday’s whirlwind tour of galleries and museums, directed by two friends and ardent museum-goers. We started with a visit to the new Whitney Museum, that has been relocated from the Upper East Side to the Meatpacking District adjacent to the popular Highline. It was exciting to see an expanded display of America’s best that included many women and artists from different ethnicities. Galleries are organized and grouped by themes.

The featured painting above is entitled “Saigon” by Peter Saul, 1967. It shows the raping, death and destruction from that horrible war. You can go to the link below and find an audio presentation about it given by a museum guide.

View of Highline from Whitney

Another View from Top 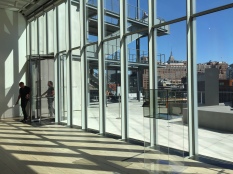 Photographer in front of Krasner piece
Photos above:
1. Sculpture by Ruth Asawa, San Francisco’s own
2. New York, 1955
3. Jackson Pollack
4. Rothko Painting indicating Tragedy, Ecstasy and Doom
5. Photographer in front of painting by Krasner, who was the wife of Pollack. After he died, she continued to paint but converted from small scale to large scale in his barn studio. 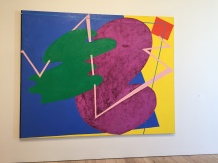 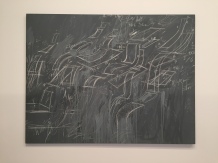 Chuck Close, with Art Lover
Normally, I roam the galleries looking for only the artists I recognize. Near the end of the visit, I made an effort to find three artists whose work I did not know. See those above for Cy Twombly, Alma Thomas, and Elizabeth Murray. So many contemporary artist represented in this vast collection can be intimidating and overwhelming, but I found that determining a small number for myself was manageable, energizing and educational. It didn’t stop me from continuing to look for those old shoes, however, for comfort’s sake!

The Whitney specializes in American Art and has been a big supporter of providing classes for artists.

For more about this exhibition that closes on Sept. 27, “America is Hard to See” go to http://whitney.org/Exhibitions/AmericaIsHardToSee

If this exhibition at the Whitney wasn’t enough, the gods must have been crazy to allow me go to another major museum in town. The Metropolitan Museum was having a major exhibition on John Singer Sargent’s “Artists and Friends”. He was born in Europe to American parents and had extensive connections to highly influential individuals, artists, and musicians in Paris, London, and throughout Europe.

Here are a few of my favorites. They are dedicated to Sargent fan Tony (if you are out there): 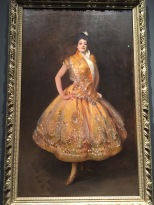 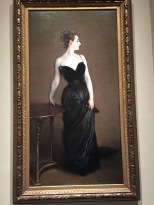 This one’s for you Helena:

For more about this exhibition “Artists and Friends”, go to http://www.metmuseum.org/about-the-museum/press-room/exhibitions/2015/sargent

And last but not least, for Isa who asked:
These are televised screen shots from the Pope’s visit last night at St. Patrick’s Cathedral. We weren’t there, but our host was late to dinner after attending the mass. We were watching TV and checking for him in the audience. The Pope seemed like a pretty nice person.