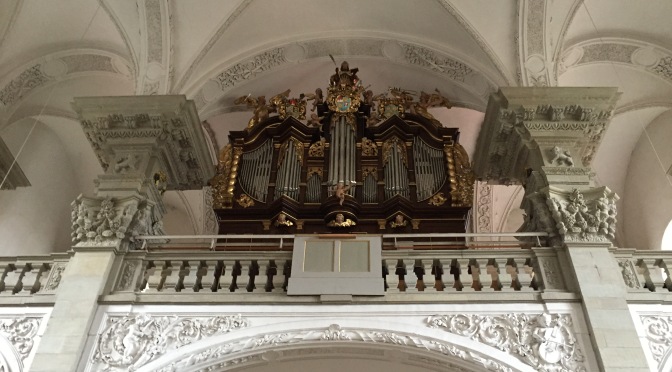 The Goethe Institute students in our class are already embarking on the second week of the two-week language and cultural program at Schwäbisch Hall. It has flown by, with many activities, new friends, and mind busting German classes that test our memories and expectations of ourselves. It feels as if we are on the same boat, cruising down the river of life together.

The Kloster Großcomburg and the Kirche St. Nicholas contains a rich collection of beautiful stone sculpture and elegant interiors. Clad with stone columns and capitals, plain ribbed walls and ceiling, and handsomely crafted wood pews, the Church interior and its materials seemed very modern and soothing to the eye. A beautiful stately organ was perched in the balcony ready to beckon its congregation. The church is at the top of a double-walled fortified hill, similar to the one at Schwäbisch Hall.

Sculptures at the Apse

The pulpit, with gilded figures

The ecclesiastical and royal stone figures possessed an air of confidence and stately manner. The king stands on the lions, a sign of royalty, but the queen is only allowed to stand on a dog as a sign of subordination. A stone knight looked poised, and ready to prance into the room. Its crisp, ribbed clothing was beautifully honed to perfection. 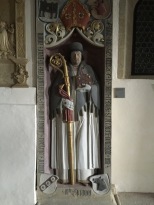 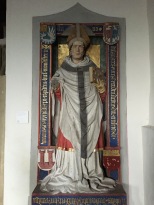 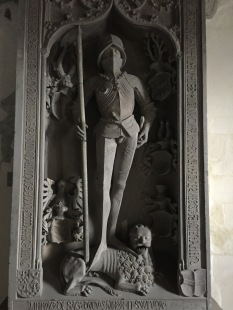 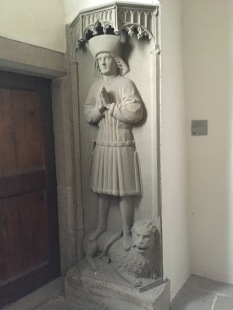 The day before, we took a full day excursion to Stuttgart and saw examples of historic buildings in the Altstadt area as well as modern, stately residential buildings with a strong Corbusier influence. With a population of 500,000, the city is built along a river and has steep hills with spectacular views similar those in San Francisco. Originally known as Bad Cannstatt, Stuttgart has a wine-growing region on the opposite side of the residential area and it was the impetus for Stuttgart’s growth. The city was bombed severely in World War II, so many of its original buildings no longer exist. Bosch, Porsche, and Mercedes-Benz are a few of its top companies. 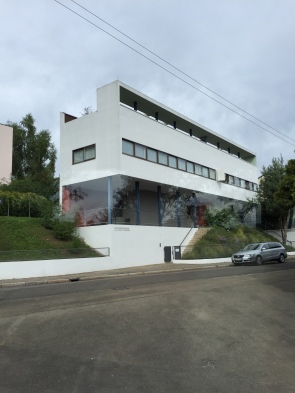 Modern Architecture
In the afternoon we visited the Mercedes Museum. Daimler merged with Benz to create the world-wide brand of Mercedes-Benz. The classic three-pointed logo stands for the company’s products for land, sea, and air. The nine-floor, museum-quality ramped building was designed by Netherland’s Ben van Berkel and Caroline Bos’s UNStudio and features a timeline and modern history of the world since the development of the first Mercedes-Benz. Many of the classic automobiles, trucks and buses are also on display there. 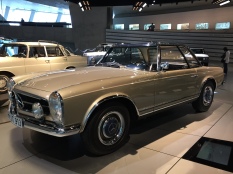 In an outing the day before, a few of us were able to break into a small group and enjoy walking on one of the several Wanderwegs, or paths through and beyond Schwäbisch Hall. Despite drippy weather and overcast skies, our group encountered a field of sunflowers that brightened our day. It was a near-perfect day–only a rainbow was missing. 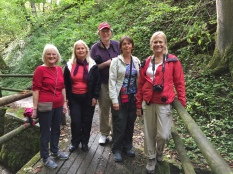 On a trip later to the supermarket, I found that wine is plentiful, with none over 6 Euros! The shelves were lined with a variety of locally produced wine. After a long search and at the end of the shelving in a “premium” section, I finally landed on a bottle of Hohenlohe Fürst Oehringen 2013 Lemberger Trocken (dry) for 9 Euros!! I tried, but I couldn’t find much for over 10 Euros.