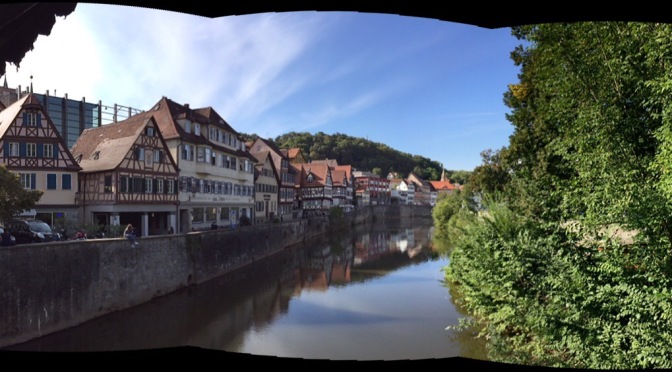 Our “Beautiful Weekend” has begun! We started on Friday afternoon with a visit to the modern art museum, the Kunsthalle Würth. It’s a private gallery, with special exhibitions for Op Art and silver from the Victoria and Albert Museum in London. The building was designed by Danish architect Henning Larsen. 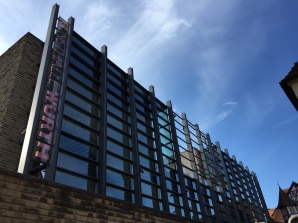 We strolled back to the main market plaza in town, past the Globe Theater, a replica of the one in England, and through the wooden bridge over the Kocher River.

On Saturday, we had an ambitious schedule for the entire day. A bus took our group of about 20 students first to Marbach am Neckar, Schiller’s birthplace. The house where Schiller was born was tiny but gave us an impression of life in this small town. Schiller was considered the “Poet of the Nation”, as he promoted freedom and the unification of the various states in today’s Germany.

If you remember, Goethe and Schiller were close friends. Much of their life’s work took place in Weimar, where we stayed for a few days earlier this year during the Dresden Music Festival. Statues of Schiller and Goethe are located in San Francisco’s Golden Gate Park. 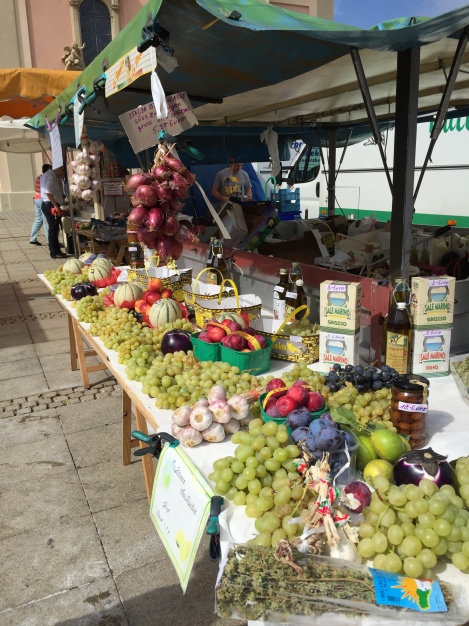 In the afternoon, we visited the baroque town of Ludwigsburg and the Ludwigsburg Palace. As a young student, Schiller lived in Ludwigsburg. Each town has its own markets, but this one surrounded by Baroque buildings was particularly enjoyable.

Germany has a strong sense of community, and each town has its special celebrations for young and old alike. This pumpkin festival, although small, reiterates the care and thought that is put into planning and implementation of each event for its citizens. It’s something I really respect and appreciate about the German culture.

I took a similar picture of the pumpkin display for a graceful older lady standing near me. When I noticed that she was struggling a bit, I asked her if she wanted me to take a picture for her. She was happy that I offered, but she was also very specific about how I should take the picture–make sure the edge of the balcony didn’t show in the picture, and get the building in the background. She declined when I asked her if she wanted a picture of herself. 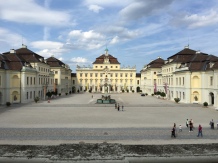