Costumes for Hire in Park 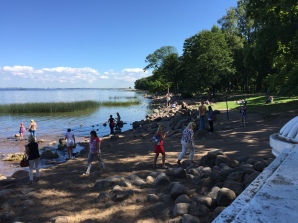 The shoreline for locals

As we leave St.Petersburg, I thought you might like to hear my impressions of this well-endowed city of approximatly 6,000,000 people (10,000,000 in the metropolitan area). Its jewels and pageantry are not lacking, and the glory of the Russian empire are embodied here. It feels distinctly Scandinavian in climate and culture, due to its position on the Baltic Sea. The city is perfect at this time of year.

Today, we took a break from the many museums and escaped from the city for a day by hydrofoil to Peterhof, the summer residence of Peter the Great. Peter chose this site around 1704 as a convenient location for his travels to and from other countries. Similar to Versailles, it has extensive gardens and palace buildings.

Gee Kin got a break from museum sickness, since it was a Monday and the palace buildings were closed. However, I did wrangle a quick, one-hour or less visit to the Treasury building. It was open and we were the only visitors in the tiny museum. Many of the gifts to and from other royalty were kept here. 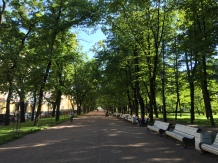 A Walk in the Park…

It was a lovely bright, clear and breezy day. Many families were in the Palace grounds spending the day together (along with the tour groups). On the way back, Gee Kin and I enjoyed the fresh marine air along the harbor, and stopped for a drink in the park near the hotel. We sat and watched local St. Petersburgers.

We found the Russian people very tidy, well-behaved and a very handsome people. Most of the young people dressed well, with just enough flair to be noticed. We couldn’t help but prefer their tailored look with the casual one in the States. But obesity is also a problem here, due to alot of bread and beer in the diet.

I still wonder why I hadn’t made a point to come here before. It is a long way to come, and unless you join a tour it can be expensive and the visa process is prickly. But it’s such a widely misunderstood country. There needs to be more direct interaction between the US and Russia. While this problem is also the case for China, it seems oddly apparent that more people have traveled to China and have greater awareness of its culture than Russia’s. Perhaps the sheer distance between the Russia and the U.S. has caused this poor link.

The other night, we went to a Russian folk dance performance. We were very surprised that we hadn’t seen one like this before. Their costumes, style of dancing, and mannerisms were new and intriguing to us. I vaguely remember seeing some dance troupe like this on the Ed Sullivan Show when I was growing up! How could I have missed exposure to this deeply ethnic and well-preserved culture my entire life?!?

In planning for this trip, I’ll admit that I was focused on the Trans-Mongolian Express and the journey more than the two end points (Beijing and Moscow). I wasn’t fully prepared for what I was going to experience at each end. It caught me by surprise, but in a very positive way. The Russian experience was very special, since I had not been here before.

The tourist industry is still relatively undeveloped. Despite the language barrier, the Russians were very friendly and polite to us.

Many local people do not speak English so it puts the onus on the traveler to communicate in the local language. Learning the Russian alphabet and survival words are somewhat essential. You won’t get English flipped back in your face if you struggle to utter a few words in the local language. This is a place where they really appreciate your efforts, so you will be warmly rewarded.

The Russian language is based on the Cyrillic alphabet, developed by the Bulgarians. They are very proud of it. It combines letters from the Roman alphabet, Greek letters, and a few of their own doing. I kept wondering why I felt like I was on Sorority Row in Berkeley. Gee Kin and I had a blast trying to decipher words in Russian. Here are a few to amuse you. See if you can guess what the words are. I’ll give you the answers in the next post.

1. PECTOPAH
2. NHTEPHET
3. MNHNMAPKT
4. CNTNbAHK
5. HYTOPNYC
(Note: I haven’t figured out how to add the Cyrillic Alphabet to my Keyboard yet. The N is written backwards).

All in all, I have thoroughly enjoyed our visit here. I hope you will consider coming and make a point to visit this fascinating country.