Those of you who have been choking over the number of museum visits on my blog this past year are going to get relief from the trudges through repositories of art and culture. Along the Trans-Siberian, there are few renown cultural centers, and no places to get off, at least on our itinerary. At pit stops, we haven’t wandered far from the train car, tethered to it by the time. We figure out where we can get a wi-fi signal (50% hit rate so far), and worry about missing the train. The attendants told us that there are no bells or whistles to warn us that the train is due to depart like there might be in the States. I’m not sure there are any there either. As the attendant looked at us, he cocked one eye against the sun and scornfully told Gee Kin that they dump the personal effects of missing trippers at the next police station. That thought deterred us from taking any risks.

Aside from stretching our legs at stopovers of 10-30 minutes, we have found plenty of amusement on the train. Heading out of the halfway mark along the line (technically the Trans-Mongolian Railway), we found ways to exercise: I walked the equivalent of 3 miles, or 3×5280 ft/the length of a train car of 50-60’x6=1 football field or 300’x18=100 times, or approximately an hour); Gee Kin used the hand rail for a ballet bar for his yoga and stair stepping, and I brought my PT stretchy band for muscle toning. We even danced to the Beegee and Beach Boys today  on hand-held music in our own private Idaho! It was great fun trying to come up with new ways to entertain ourselves.

The scenery has been a very good backdrop for these types of activities. We could listen to classical music with intent on our phones, learn survival Russian alphabet and phrases, and stare into the horizon for minutes on end. To describe the scenery…well let me see. After getting away from the smog of Beijing in the first four hours, the hilly mountains and picturesque terraces of Hebei Province and Inner Mongolia finally appeared. That quickly led to magnificent and stunningly clear plains and steppes of Mongolia. The pastoral views of horses, cattle, goats, sheep and camels were dotted with white puffy marshmallow yurts. The expanse of space was soothing and impressive. It gave us a reason to return to learn more about the Mongolian way of life. We hope that its nomadic lifestyle won’t disappear before we have a chance to return.

The Russian countryside first looked bleak and impovershed. Most countries don’t showcase their best along railway lines, but what I noticed was the prevalent neglect of structures. It seems that once a building was constructed, it was left to deteriorate and to let nature take its course. Many buildings looked rusted out or in need of repair. The one-story houses on flat terrain eventually gave way to more affluent, two-story Alpine style chalet buildings along the slopes of mountains.  They too seemed prone to being run down. We noticed people walking along unpaved roads with few cars. This vast country (4800 miles from Beijing to Moscow, 1.5 times the width of the US, and more than 6,000 miles on the Moscow-Vladivostok route, or 2 times the US width) would have a hard time keeping its transportation network maintained, for so few people. It is so spread out that there seems to be logistic problem in paying for its infrastructure and upkeep.

Cities are much more well endowed with mid-rise buildings, and few high rises so far. As part of my crane-spotting interest throughout the world, I was pleasantly surprised to find cranes populating the denser areas of the big Russian cities, but only a handful at best. This cannot be compared to the crazy building boom in China that I witnessed in my travels over the past year. Every major city I visited was benefitting from the internet revolution, except perhaps Russia. Everyone seems to live very simply and have to live with less. These are only impressions, and without validation from local people. Hopefully we will be able to get some perspective on this when we visit Moscow.

Our tour of train stations yielded some depressing results. A few over the top showcase-style buildings, but they were too over-articulated, with massive bulky shapes and proportions for a Western-trained eye. Wood was used for all rural and low-rise city housing and some brick, but very little or no stone or concrete structures existed. The massive woods of birch trees along the entire railway line are attractive to look at, but the only variation of the landscape is an occasional field of wheat, corn or hay.

We turned our attention to the environment inside the train and found plenty of activity to occupy our time. I finally set up my new Macbook filing system and felt superior achievement after a few hours’ effort today. Aside from preparing my blogs (they take about an hour or so each day), posting them at station stops (results are highly unpredictable and with high drama), and an occasional short nap, we have not been bored at all. Gee Kin tells me he likes traveling with me, but I know he needs to go home to recover. He says he has work to do, but I know he is just being kind to say that. 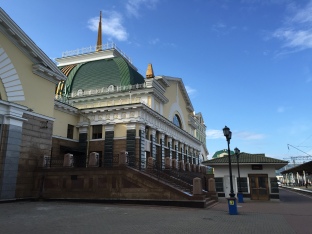