We took it easy this morning. After a leisurely cup of cappuccino, we walked to the corner of town to visit Tryyn Gallery, where the owner, Bill, hones beautiful pieces of wood into spoons. He finds the inherent beauty in each piece of exotic wood and turns each piece into both functional items as well as works of art. 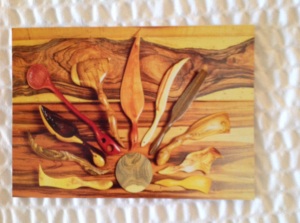 We got into an extended conversation about the huge bamboo section that was inside the glass display cabinet. Bill explained that the roots at the outside tip of the piece had been cut and sanded down, and that the tip was the bottom of the root. We had a difference of opinion and believed that the tip pointed up and outside. Which way do you think the tip faced–up or down? Our initial research only confused us more. 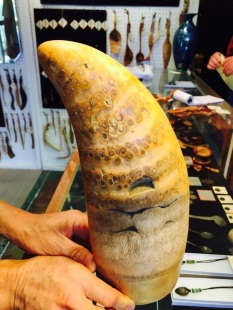 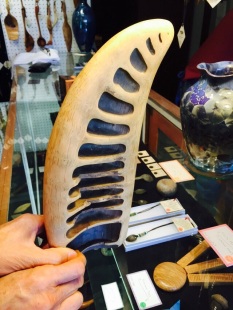 Later in the morning were taken on a breathtaking tour of Pine Valley. It is deep in the Cleveland National Forest. We followed an old fire lane up into the hills of manzanita, live oaks, sage and agave plants. The hillsides were laden with thick growth from two weeks of rain, an unusual occurrence this late in Spring season. You can see the panoramic view of the valley in the header above.

After our venture into the hills where we had walked the previous day, we made a stop for lunch at a local saloon. Not too much was going on, except that the counters were made of shellacked half-logs and the seats were even bigger sections of logs. Sorry, guys, no foodie shots available here (you are being spared). A couple of relics served (or didn’t serve) us, in an area where you could hunt, if you used a bow and arrow.