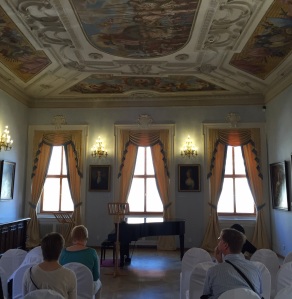 After our initial determination to attend a performance at Prague Castle, we discovered the Lebkowicz Palace where the afternoon concert was held. Rather than hitting the more popular Castle grounds, we learned that the Lebkowicz Family had a fascinating history, tracing from the Spanish King Philip of the Spanish Armada and New World fame to a modern day American family. They lost their inheritance twice, first to the Nazis in WWII and then to the Communists.

It wasn’t until the Velvet Revolution in 1989 that the Lebkowicz family fully recovered its properties in Prague. The Palace boasts the largest private collection of artwork in Central Europe that includes paintings by Bruegel, Velasquez, Cranach, and Canaletto. We followed the history in a fascinating audio guide narrated by Martin Lebkowicz himself, the American heir to the Lebkowicz family. The history transcends many historic events in European history, particularly the Thirty Years’ War. 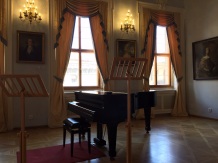 A Chinese wedding booked part of the Palace, and this entry was decorated for the affair. The musical performance in the main room included classical hits featuring flute, piano and viola solo and trio performances. The room was recently renovated as part of the Lebkowicz Palace. 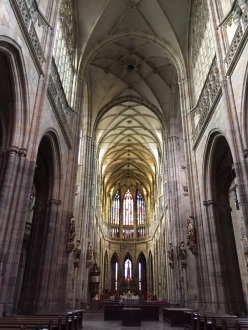 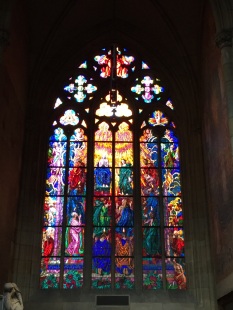 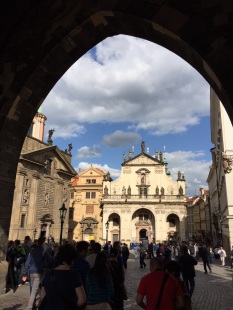 Sights and sounds around the city included views of Prague Castle, St. Vitus Cathedral exterior and interior Stained Glass Window detail, and fine examples of local Baroque architecture. The panoramic view in the header above shows the Vlatava River, Dresden’s equivalent to the Elbe River (both painted by Canaletto). 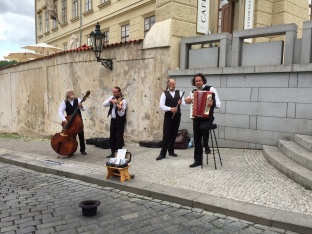 Bolivian
Street musicians played classical, Blue Grass and Bolivian tunes. Music in Prague is eclectic and non-judgmental. Whatever you want to hear will be here, from Pop to Classical, high-brow to low. It demonstrates the vibrancy of the city and the arts that permeate society from the past to the present.

Some initial comparisons between Dresden and Prague:
1. Both are located along a winding scenic River with many bridges.
2. Both have a historic and active musical tradition.
3. Both have a strong respect and patronage for the arts.

These are only first day impressions, more to come.

The news of the day is focused on Cameron and the Conservative Party winning the most seats in the British election!

2 thoughts on “Unplugged in Prague”