Until you’ve been to the American Museum of Natural History in NYC, you won’t really have a good grasp or perspective on dinosaurs and the age in which they proliferated. The extensive displays, educational material and timelines were fascinating. Embarrassingly, it was my first time there, but I’m glad I finally made it up to myself and others.

While dinosaurs were found throughout the world, I had only heard about the dinosaur fossils and bones that were discovered in North America. Many of the intact fossils were found in swampy areas where the dinosaurs got stuck in the mud (literally). After the mud solidified to stone over millions of years and their bodies disintegrated, the dinosaurs became fossils. This enabled paleontologists to access many complete sets of bones for research. One of the early elephants, known as a mammut, was found locally in Newburgh, NY, in the back yard of Vassar!

The above photo shows a early rhino-like dinosaur. Below are photos of the mammut (with the elephant tusk), an early moose-like dinosaur and other pretty creepy looking animals. It seems that a huge meteor that hit somewhere in the Yucatan caused the extinction of dinosaurs around 65 million years ago. Only the birds that could fly were among the survivors, yet they too met an eventual decline.

Many of you familiar with San Francisco’s Golden Gate Park may not realize that it was designed by landscape architect Frederick Law Olmsted. He also designed New York’s Central Park. There are many similarities in shape and proportion, but Golden Gate Park is actually 20% larger. At the same time, the Academy of Sciences in San Francisco must have modeled the displays of animals after those in the AMNH. The displays of taxidermy (“stuffed animals”) reminded me the ones we took our kids to sketch in the Academy. (Kids can now stay overnight at the AMNH, just like in Ben Stiller’s “Night at the Museum” movie).

It’s no wonder that Teddy Roosevelt was so awed by the scale of these living creatures and initiated the National Parks so more people could see them. The Alaskan Brown Bear, bison and Alaskan moose were among my favorite exhibits, shown below. 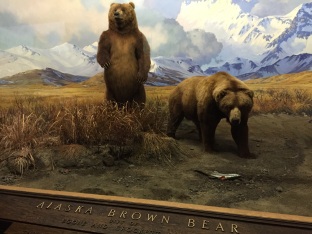