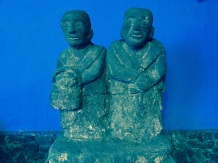 From top, left to right:

1. Headdress by Kahlo. She may be seen as eccentric, but she used fancy headware to distract from her physical disabilities. She had polio as a child and had one foot shorter than another. At 18, she was in a severe accident where a streetcar collided with a bus she was riding. This required over 22 surgeries during her life and numerous prosthetic devices.

2. 3. Artwork and clothing design by other artists inspired by Frido Kahlo style
4. and 5. Kitchen and Back wall
6. Vestibule in Museum
7.8.9. Stone sculpture reminiscent of Mayan sculpture by friend of Kahlo and Rivera

Despite the worldwide fame of Frida Kahlo and Diego Rivera, to learn the life of Frida from this museum visit was very sad. She was affected by her disability most of her life and had her foot amputated due to gangrene before her death.

Born in 1907 to a Hungarian-German father and mother who was Spanish-Mexican, she faced her physical disability from childhood. She was unable to have children due to her accident and many of her sketches and artwork showed her wrestling with this condition.

Still, her artwork rivalled that of Rivera. They were married, separated and remarried. Their work was shown in Europe, Mexico, NYC, and San Francisco of all places! They were in the company of many famous people, including Trotsky. Frida was a Communist supporter. She died in 1954.