It’s hard not to comment on one of man’s eternal pursuits—food. From our standpoint, the food served in dining cars has been OK, not the greatest, but it is convenient and not as bad as its reputation. Last night we had our second meal in the Russian Dining car—pretty empty both times for some mysterious reason. We had a “square meal” with roast chicken, tomatoes and cucumbers on the side. Gee Kin had a beef stew in a small bowl. The meals were small, but then we realized that this is more indicative of the rest of the world, and not the kind of portions you get in big fat America. The earlier one was similar, but we both had grilled salmon and I added some borscht out of curiosity.

The more fascinating aspect of food is how the attendants eat. Our two attendants took care of us, but they took care of themselves too. As we headed to our dining car last night, we had to transcend 5 cars, including both second class luxury and soft sleepers. Each pantry was occupied by one of the two attendants of each car. They were preparing their own meal, and each one was preparing the exact same dish. Some were slightly ahead of others, but they were preparing jaio zi for themselves and their other teammate!

Apparently, the car attendants are supplied the same ingredients for each trip at the beginning. From Beijing on, they use the meat and vegetables to prepare a fresh homemade meal. The washroom we used every day was a store room for their food. We could see the plastic bags of peppers and tomatoes (see photo if it’s loaded). Note that the counter above is used for charging our devices. This use competes for attention in this room along with daily washing and the precious food storage for the attendants.

We were jealous of the attendants’ ability to prepare food in their pantries (off limits to travelers), but were intrigued with their consistency. Each car’s attendants were doing the same thing—one minded the tasks for maintaining the car while the other cut meat, chopped it, and wrapped jiao-zi (dumplings) in probably less than an hour. It’s a bit of a monastic order, as we learned that many of the attendants have worked on the job for twenty years or more.

I pondered what the Amtrak crew did in a similar situation. Nothing seems to be more stark in contrast. I hope to investigate what American train attendants do for their own needs and how they do it. It reinforces China’s focus on food. #1. I don’t think it compromises safety or service to customers, but it does make a statement about what a society deems to be important in life.

After spending a lifetime learning many languages, some better than others, I ran into one of my first communication barriers. We met the woman sharing our car today. She didn’t speak any English, German, French, Cantonese or Mandarin. And we didn’t know a stitch of Mongolian or Russian (aside from the three words we just taught ourselves). A lost Golden opportunity, despite warm smiles both ways.

Latest flash: Gee Kin managed to take a picture of the Baozi (Like Cha Siu Bao, but with wild grass picked on the side of the railway line, garlic, and scrambled egg) in our car today. The attendant then surprised us later with a gift of one to each of us! A delicious treasure to behold!! 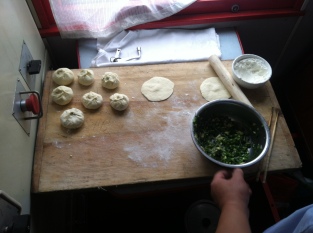 Baozi made in pantry

Voila! Our gift from attendants